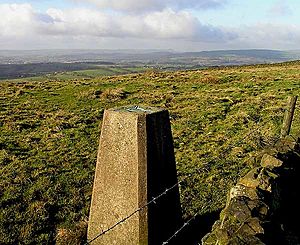 Morridge is a geographical feature, a few mile east of Leek, in Staffordshire, England. It is in the local government district of Staffordshire Moorlands.

It is a long ridge of high moorland. The northern end, Morridge Top, is about a mile south of Flash. A few miles south at Merryton Low, near Upper Hulme, there is a trig point at height 489 metres (1,604 ft). The southern end of Morridge is at Onecote and Bradnop.

All content from Kiddle encyclopedia articles (including the article images and facts) can be freely used under Attribution-ShareAlike license, unless stated otherwise. Cite this article:
Morridge Facts for Kids. Kiddle Encyclopedia.