The Morris and Helen Belkin Art Gallery is a contemporary art gallery in Vancouver, British Columbia on the campus of the University of British Columbia. The gallery is housed in an award-winning building designed by architect Peter Cardew and opened in 1995. It houses UBC’s growing collection of contemporary art as well as an archive containing more than 30,000 objects related to the history of art in Vancouver.

The Morris and Helen Belkin Art Gallery mounts 4 to 7 exhibitions of art per year by nationally and internationally known artists, and works from the collection are showcased annually in a thematic exhibition. The Belkin Art Gallery also creates small scale traveling exhibitions for circulation within Canada, and collaborates on large scale international exhibitions. The gallery's mandate includes research, publication, and a program of screenings, performances, and lectures by artists, scholars, curators and critics.

Since 2003, new outdoor works have been installed on campus by artists Rodney Graham, Jamelie Hassan, Myfanwy Macleod, and Edgar Heap of Birds. A self-guided tour of outdoor art on campus can be downloaded from the Morris and Helen Belkin Art Gallery website. The gallery and campus have outdoor sculpture and have been reported on as part of Vancouver's public art scene. Exhibitions have included artworks by indigenous artists.

Admission to the gallery is free. An estimated 13 percent of the gallery's collection is from female artists and an edit-a-thon was launched at the gallery to create articles on more of those women on Wikipedia in 2017.

The UBC Fine Arts Gallery was founded in 1948 in a basement section of the Main Library on the University campus. The Fine Arts Gallery was the only venue in the Vancouver region that focused exclusively on contemporary art. The gallery rose in national status during the 1960s and 1970s by presenting innovative work by artists who were establishing Vancouver on the international art scene.

Until 1994, the gallery was used only as an exhibition space; afterwards, it began to house and administer the University Art Collection. On June 14, 1995, the Fine Arts Gallery was rededicated as the Morris and Helen Belkin Art Gallery and opened its new facility at 1825 Main Mall. 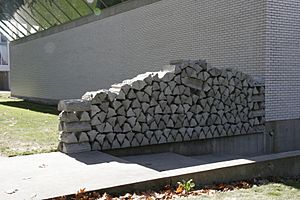 Wood for the People by Myfanwy MacLeod, 2002

The gallery also houses a permanent archives. The largest collection in the archives is the Morris/Trasov Collection, which holds thousands of items relating to artists Michael Morris and Vincent Trasov.

All content from Kiddle encyclopedia articles (including the article images and facts) can be freely used under Attribution-ShareAlike license, unless stated otherwise. Cite this article:
Morris and Helen Belkin Art Gallery Facts for Kids. Kiddle Encyclopedia.