Mounds Mall is a defunct enclosed shopping mall located in the city of Anderson, Indiana, United States. Opened in stages between 1964 and 1965, it was the first enclosed mall developed by Simon Property Group. The mall's original anchor stores were H. P. Wasson and Company, Montgomery Ward, and J. C. Penney; over time, the Wasson store became Meis, Elder-Beerman, and Carson's, while Montgomery Ward became Sears and J. C. Penney became a movie theater. After a period of decline, Mounds Mall closed to the public in April 2018. 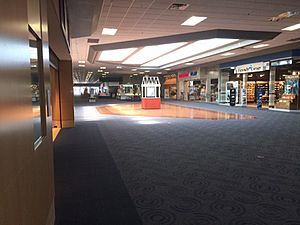 Interior of Mounds Mall in March 2018.

Montgomery Ward closed and became Sears in 1983. Also in the 1980s, the Wasson store became Meis, then Elder-Beerman, and finally Carson's in 2011. In 2012, the Sears closed as a result of low sales of the 2011 holiday season. On January 31, 2018, The Bon-Ton announced that Carson's would be closing as part of a plan to close 42 stores nationwide. The store Closed in April 2018. Shortly later, it was announced that the whole mall would close along with the Carson's. The mall closed on April 1, 2018.

All content from Kiddle encyclopedia articles (including the article images and facts) can be freely used under Attribution-ShareAlike license, unless stated otherwise. Cite this article:
Mounds Mall Facts for Kids. Kiddle Encyclopedia.