Mount Earnslaw / Pikirakatahi is a 2,819-metre (9,249 ft) mountain on New Zealand's South Island. It is named after Earnslaw (formerly Herneslawe) village in the parish of Eccles, Berwickshire, hometown of the surveyor John Turnbull Thomson's father.

Mount Earnslaw is within Mount Aspiring National Park at the southern end of the Forbes Range of New Zealand's Southern Alps. It is located 25 kilometres north of the settlement of Glenorchy, which lies at the northern end of Lake Wakatipu.

Mount Earnslaw and various other sites in its vicinity feature in the live-action film version of The Lord of the Rings. 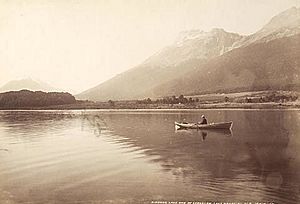 Reverend W.S. Green had come to New Zealand to try to climb Mount Cook. In March 1882, with guides Emil Boss and Ulrich Kaufmann, he attempted Earnslaw, but transport and weather problems forced them to turn back after climbing 5,000 feet (1,500 metres).

After several attempts over a period of years, Glenorchy guide Harry Birley climbed the eastern peak of Earnslaw in 1890. He left a bent shilling in an Irish Moss bottle within a stone cairn, to prove he had reached the top.

All content from Kiddle encyclopedia articles (including the article images and facts) can be freely used under Attribution-ShareAlike license, unless stated otherwise. Cite this article:
Mount Earnslaw / Pikirakatahi Facts for Kids. Kiddle Encyclopedia.