Mount Fitch is the third-highest peak in the Commonwealth of Massachusetts at 3,110 feet (950 m). It is located on the ridge between Mount Greylock at 3,491 feet (1,064 m) to its south and Mount Williams at 2,956 feet (901 m) to its north. The peak sits in the northwest corner of the Town of Adams (originally known as the Town of East Hoosac) in Berkshire County. The forested summit is approximately 123 yards (112 m) due west of a local high-point on the Appalachian Trail. Mount Fitch does not meet the AMC's prominence criterion of 200 vertical feet of separation from adjacent peaks as outlined in New England's Four-thousand footers list. Currently there is no side-spur trail or signage directing a hiker to the summit of Mt. Fitch from the Appalachian Trail; however, there is a wooden placard at the summit itself (pictured at right). The top is infrequently visited by hikers due to its anonymity, the bushwhack necessary to reach the top and the viewless summit. 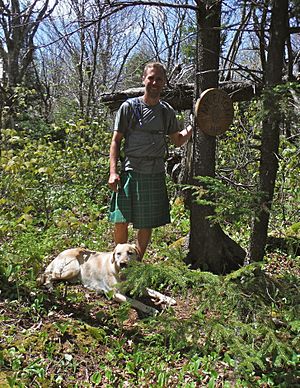 An occasional hiker reaches the top amongst the pucker brush.

The peak is named for Ebenezer Fitch, who served as president of Williams College in nearby Williamstown, Massachusetts from 1793-1815. The name and geographic significance of the peak were disparaged by R.R.R. Brooks in his 1953 history of Williamstown, "[I]t is doubtful whether more than one resident in ten knows Mt. Williams from Mt. Fitch".

In 1947, local residents Dr. Joseph Wilk and Bartlett Hendricks terminated clear cutting the summit of Mount Fitch, which remains overgrown to this date. 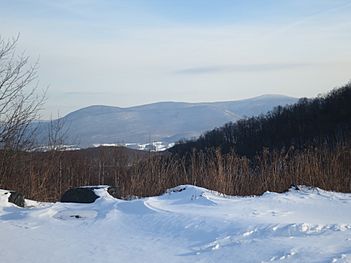 All content from Kiddle encyclopedia articles (including the article images and facts) can be freely used under Attribution-ShareAlike license, unless stated otherwise. Cite this article:
Mount Fitch (Massachusetts) Facts for Kids. Kiddle Encyclopedia.