Mount Gulaga, also Gulaga, and formerly known as Mount Dromedary, a mountain located in the south coast region of New South Wales, Australia, rises above the village of Central Tilba and is within the Gulaga National Park. At its highest point, it measures 806 metres (2,644 ft) above sea level. 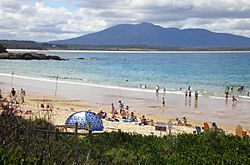 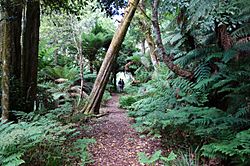 The Rainforest Track at Mount Gulaga.

Gulaga is the place of ancestral origin within the mythology of the Yuin people, the Indigenous Australians of the area. Gulaga itself symbolises the mother and provides a basis for Aboriginal spiritual identity; the mountain as well as the surrounding area holds particular significance for Aboriginal women. For the Yuin people it is seen as a place of cultural origin. The mountain is regarded as a symbolic mother-figure providing the basis for the people's spiritual identity.

European discovery and early use

The first Europeans to sight the mountain were the crew of Captain Cook's ship, HMS Endeavour on 21 April 1770. Endeavour passed the mountain at a distance of 15 miles (24 km) offshore. Cook named it "Mount Dromedary", as its figure reminded him of the hump of a camel.

In the mid-1800s, Mount Gulaga, then called Mount Dromedary, became a prominent site of gold mining. Rev. W.B. Clarke first found traces of Alluvium gold in Dignams Creek in 1852. Gold mining then became a common activity in the area. A significant amount of gold was found in deposits along streams coming from Mount Gulaga's slopes. Between 1878 and 1920 approximately 603 kilograms (1,329 lb) of gold was found in its slopes. Near the crest of Mount Gulaga, reefs were discovered in 1877 that allowed for gold mineralization. These Pyrite-rich veins which range in size from 15 to 45 centimetres (5.9 to 17.7 in) were mined by the Mount Dromedary Gold Mining Company.

When Mount Gulaga was an active volcano over 60 million years ago, its peak was approximately 3,000 metres (9,800 ft) in height. Though the peak has fallen due to shifts in the Earth's crust, the peak can still be seen from virtually anywhere in the Tilba region. It is also visible across from many lakes, such as Wallaga Lake National Park or Lake Corunna.

Mount Gulaga is made up mainly of a Cretaceous–age igneous rock complex. Mount Gulaga ascends from this rock complex to 797 metres (2,615 ft) above sea level. The mountain is composed of banatite rock with an outer rim of Monzonite.

Mount Gulaga is located within the 4,673-hectare (11,550-acre) Gulaga National Park and the area serves as a site for public activity as well as a place of significance for the Aboriginal peoples. The national park provides walkways along the mining roads, which provide views of the coastal lakes. The hike from Tilba to the summit is approximately 11 kilometres (6.8 mi); taking about a half a day to complete. Though it is steep in a few places along the way, it is a fairly leisurely hike, requiring no special hiking equipment.

Access to the park is approximately 10 kilometres (6.2 mi) north of Bermagui. The lakes can be accessed by boat, which can be rented from Regatta Point or Beauty Point.

All content from Kiddle encyclopedia articles (including the article images and facts) can be freely used under Attribution-ShareAlike license, unless stated otherwise. Cite this article:
Mount Gulaga Facts for Kids. Kiddle Encyclopedia.