The mountain divides the localities of Lucaston to the north east, Ranelagh to the south and Judbury to the west. The Russell Ridge Conservation Area to the north links Mount Misery Habitat Reserve to Mount Wellington Park. The mountain is entirely within the Huon Valley watershed.

Mt Misery is within the Huon Valley Local Government Area.

Most of the land is used for nature-focused residences. Some is used solely for conservation, a few are used as weekend getaways and one group of five titles is an ecotourism resort.

The southern slopes are predominantly tall wet eucalyptus forest with small pockets of rainforest, growing in shallow peaty soils. The northern slopes are dry Eucalyptus tenuiramis on shallow mudstone soils. Most of the land is open grassland. 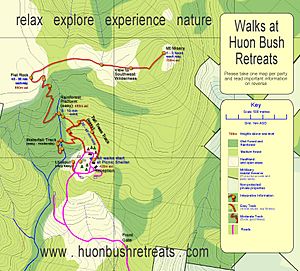 Public access is via a 5-kilometre (3.1 mi) walking track through rainforest and subalpine heathland to the boulders at the summit. Thirty interpretive panels explain the area's Aboriginal history and environmental issues. It takes approximately three hours to walk to the summit. There is no access charge.

All content from Kiddle encyclopedia articles (including the article images and facts) can be freely used under Attribution-ShareAlike license, unless stated otherwise. Cite this article:
Mount Misery (Tasmania) Facts for Kids. Kiddle Encyclopedia.