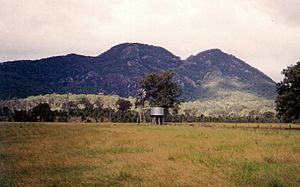 It lies approximately 100 km south west of Brisbane just outside the town of Boonah.

The mountain was established as a national park in 1953.

The peak is a rhyolite plug. The rise features a craggy landscape dominated by a prominent fracture that has been enlarged by erosion. Access to the mountain is via private property only, for which permission must be obtained.

All content from Kiddle encyclopedia articles (including the article images and facts) can be freely used under Attribution-ShareAlike license, unless stated otherwise. Cite this article:
Mount Moon Facts for Kids. Kiddle Encyclopedia.