The area consists mainly of suburban housing located on the steep south-eastern slopes of Townhill. The demographic of the area has changed in recent years, and there is a substantial student population. In 2014 local residents complained about anti-social behaviour, blaming it mainly on immigrants and asylum seekers brought to live in the area by the local authority. In February 2015, police reported that the problem had been resolved by more frequent patrolling.

The University of Wales Trinity Saint David (UWTSD), formerly Swansea Metropolitan University and before that the West Glamorgan Institute of Higher Education, has one of its campuses on the main Mount Pleasant road. The university was created in 2010 and also incorporates the former Swansea College of Art, founded in 1853, which retains accommodation in Alexandra Road. 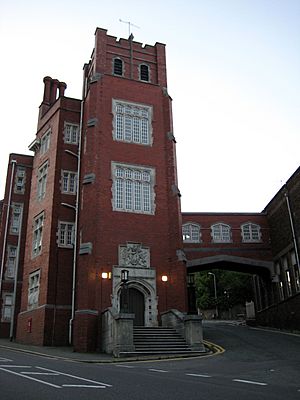 Mansell Street, De La Beche Street, Grove Place, and Alexandra Road cross the southern fringes of the area as a continuous thoroughfare. Located on this thoroughfare are Swansea Magistrates' Court, Swansea Central police station, Glynn Vivian Art Gallery, the old Swansea Central Library, and the building housing the arts wing of the university. Alexandra Road is a designated conservation area, and consists of a number of buildings which were constructed between the late nineteenth and early twentieth centuries. The road has a number of shops, including a new Tesco Express, opened in 2008.

Established businesses in the main Mount Pleasant street and Terrace Road include the Windsor Lodge Hotel, a café, the Mountain Dew public house and a hairdressing salon. Terrace Road Primary School was opened in 1888 and has approximately 300 pupils.

A workhouse opened in Mount Pleasant in 1862, between what was known as "Gibbethill" and a lower slope known as "Poppithill". In 1895, it held 584 inmates in extended buildings. It was later called Tawe Lodge, and eventually became Mount Pleasant Hospital in 1929, when it was taken over by Swansea County Borough Council. The hospital closed in 1995 and was converted to accommodation for students. Hospital records are now held by the West Glamorgan Archive Service, as are records of the original Swansea Poor Law Union from 1842 to 1960.

Mount Pleasant Baptist Church is located on the Kingsway, one of the city's busiest roads, and was built in 1825, when the street was named Gower Street. Christmas Evans preached at its opening service in the following year. It was nevertheless built to accommodate the needs of the English speakers in the congregation of the former Back Lane chapel, when it divided following the death of its minister Joseph Harris (Gomer). It would be one of the few notable buildings in the centre of the town to survive the bombing of the Second World War.

All content from Kiddle encyclopedia articles (including the article images and facts) can be freely used under Attribution-ShareAlike license, unless stated otherwise. Cite this article:
Mount Pleasant, Swansea Facts for Kids. Kiddle Encyclopedia.