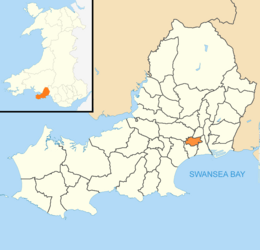 Location of the Townhill community within Swansea

Townhill is the name of a hill, a residential district and a community (civil parish) and electoral ward in Swansea, Wales, UK. It had a population of 8,696 in 2011.

The Garden City style layout of Townhill was overseen by Ernest Morgan, the Swansea city architect, in the early 1920s.

Townhill Baptist Church was formed on the hill in the late 1920s and the church still meets today on Sunday mornings and evenings in the original building on Powys Avenue.

Swansea St Nicholas on the Hill and St Jude, Townhill

St Nicholas on the Hill is the parish church for Townhill, on the corner of Dyfed Avenue and Powys avenue next to the St Nicholas Community hall - meeting on Sunday mornings and Wednesday mornings.

The suburb of Townhill falls within the Townhill ward. The district of Townhill consists of a council estate and some private housing spread over a steep hill of the same name bordering Mayhill and visible from the Swansea city centre. The area overlooks Swansea city centre, Swansea Docks and Swansea Bay to the south; and Cockett, Gendros and Cwmbwrla to the north.

Local amenities at the top of the hill include a public library, the Townhill Community primary school, a nursery school and some playing fields. Swansea Metropolitan University has a campus to the west.

Townhill is a Communities First area.

The hill is rounded by a band of rock which is too steep to develop on and is recognised by the City and County of Swansea council as a wildlife corridor. In this band, on the south side of the hill is the designated Rosehill Quarry Community Park. Rosehill Quarry is a semi-natural urban green space which is not formally cultivated in its entirety. Wildlife areas include a stream, waterfall and several ponds. There are over one hundred species of plants including oak, royal fern and rowan trees. Around thirty species of birds can be found in the park, including sparrow hawks, kestrels, and tawny owls. Additionally, there are frogs, newts, dragonfiles, damsel flies, and the rare bluetailed damselfly, which is used as the quarry's symbol. Recreational facilities in the park include picnic tables, play equipment, and a BMX bike track.

The Rosehill Quarry six acre site was quarried for stone for house-building from the 1840s, creating the only flat ground in the area. The area stood derelict for some time until the early 20th century when the area was used as a tennis court which later fell into disuse. In the 1970s, planning permission was granted for a block of flats, which never got built. In the 1970s and 1980s, local residents' initiatives persuaded the local council to buy the land and designate it as a public open space in the Local Plan. The Rosehill Quarry Group was formed, with support from the council, to develop and maintain the quarry as the first community park in Swansea.

Constitution Hill leads up towards the Townhill district from Swansea city centre. This is a steep sloping cobbled street made famous in the feature film Twin Town, being featured in a scene with a daring car stunt. Constitution Hill is one of the steepest road hills in Swansea. In the early 20th century, the Swansea Constitution Hill Incline Railway operated up and down the hill. The hill is also sometimes used for cycling races held in Swansea. Constitution Hill forms part of the boundary between the Castle and Uplands wards.

All content from Kiddle encyclopedia articles (including the article images and facts) can be freely used under Attribution-ShareAlike license, unless stated otherwise. Cite this article:
Townhill, Swansea Facts for Kids. Kiddle Encyclopedia.