Uplands (Welsh: Pantygwydr) is a suburb and community of Swansea, Wales. It lies about a mile (2 km) to the west of Swansea city centre, and falls within the Uplands electoral ward. It is centred on the A4118 road, which links Swansea city centre and Sketty. The main road begins as Walter Road from the east, and becomes Sketty Road towards the west. Much of the area is hilly. The population of the community and ward in 2011 was 15,665 and in terms of Welsh identity had the lowest percentage in the county. 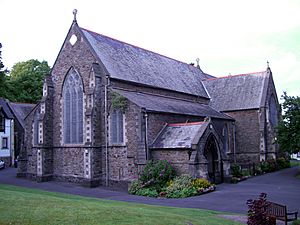 Uplands' main shopping area is located on and around Uplands Crescent, where small businesses mix with fast-food outlets and high-street heavyweights like Boots, Sainsbury's and Tesco. The western side of Bryn-y-Mor Road also has a number of convenience stores, hairdressers, fashion boutiques, pubs and restaurants.

The area is becoming increasingly well-known amongst the people of Swansea for its night-life, with a number of late-night bars and restaurants having opened their doors during the early 2010s. The Uplands Tavern pub, however, has long been a popular venue, and was once frequented by Kingsley Amis and Dylan Thomas, although the two writers were never residents of Uplands at the same time. The latter's childhood home on Cwmdonkin Drive has a blue plaque marking it as his birthplace, and in June 2012 it was reported that a statue of Thomas would be unveiled in Uplands during the centenary of his birth in 2014, although the exact location of the statue has not yet been revealed. In 2012 the annual Do Not Go Gentle Festival was launched, hosting live music and literature across various venues, it aims to be "a festival Dylan Thomas might have liked".

Uplands is a relatively salubrious area of Swansea, with property prices above the national average. Council tax rates are quite high because of this, falling into band C and above. The housing stock consists of fairly large properties; three-storey properties and properties containing four bedrooms or more are common. Many of the larger properties have been converted into student houses, making the Uplands area popular amongst students attending the city's two universities. 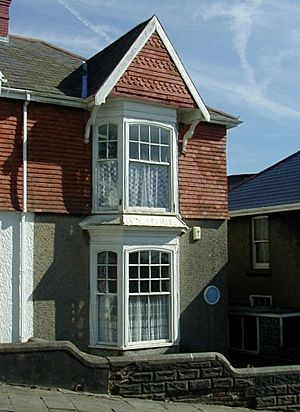 Eaton Crescent, considered to be one of the most upmarket residential areas close to Swansea's city centre, is where Conservative politician Michael Heseltine grew up. The crescent consists mainly of large three-storey semi-detached and terraced 4-6 bedroom town-houses. During the late 1980s, a large number of properties were converted for use as student houses, but since the late 1990s it has mainly returned to housing families.

Stella Maris is a convent occupied by the Sisters of Ursulines of Jesus on Eaton Crescent. The sisters once ran the Stella Maris Primary School, a former independent convent school that is now closed.

St. James' Church, located on Walter Road, was opened in 1867 as a chapel of ease for the nearby St. Mary's in Swansea's town centre. It became a separate parish in 1985. There is a Jehovah's Witness Kingdom Hall on the corner of Walter Road and Mirador Crescent, and the Dharmavajra Kadampa Buddhist Centre is located in Springfield House on Ffynone Road. The Mansion House, the official residence of the Lord Mayor of Swansea, is also on Ffynone Road.

Local parks are Cwmdonkin Park, Rosehill Quarry Community Park, and Brynmill Park, with the former an important location and source of inspiration for Dylan Thomas, who lived so close to the park during his childhood that "on summer evenings I could listen, in my bed, to the voices of other children playing ball". Cwmdonkin Park features heavily in the radio broadcasts 'Return Journey' and 'Reminiscences of Childhood' and, most famously, the poem 'The hunchback in the park'. A memorial stone with lines from another of Thomas' poems, 'Fern Hill', was placed in the park in 1963.

All content from Kiddle encyclopedia articles (including the article images and facts) can be freely used under Attribution-ShareAlike license, unless stated otherwise. Cite this article:
Uplands, Swansea Facts for Kids. Kiddle Encyclopedia.