Mount Radford is an historic estate in the parish of St Leonards, adjacent to the east side of the City of Exeter in Devon. 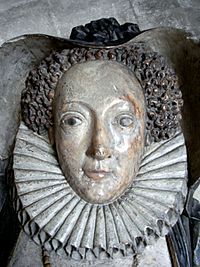 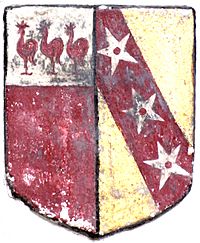 Heraldic escutcheon showing the arms of Hancock of Combe Martin: Gules, on a chief argent three cocks of the field impaling Bampfield of Poltimore: Or, on a bend gules three mullets argent (shown here pierced). Detail from the base of the monument of Dorothy Bampfield (d.1617) in the Lady Chapel of Exeter Cathedral 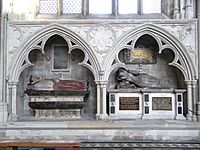 Edward Hancock (c.1560-1603) was the son and heir of William Hancock (d.1587) of Combe Martin. He was MP for Plympton Erle (1593), Barnstaple (1597) and Aldborough (1601). He matriculated at Trinity College, Cambridge in 1578 and entered the Inner Temple c.1580 and was called to the bar in 1590. He was Clerk of Assize on the western circuit in 1590. He married Dorothy Bampfield (d.1614), daughter of Sir Amyas Bampfylde (1560-1626), MP, of Poltimore near Exeter and North Molton in North Devon. Edward Hancock died on 6 September 1603. He left a one-year-old son and heir William II Hancock (1602-1625). Dorothy survived her husband and received Mount Radford as her dower house, where she lived with her second husband. She remarried to the highly influential Sir John Doddridge (1555–1628), a Justice of the King's Bench, and contemporary of her father, who had purchased as his seat the North Devon estate of Bremridge, near Dorothy's father's seat of North Molton. She was a Maid of Honour to Queen Elizabeth I and has a sumptuous monument to her memory in the Lady Chapel of Exeter Cathedral, next to that of Dodderidge.

The father of William II Hancock (1602-1625) died when William was an infant aged one year. His mother Dorothy Bampfield then remarried, as his 2nd wife, the highly influential Sir John Doddridge (1555–1628), a Justice of the King's Bench, and contemporary of her father, who had purchased as his seat the estate of Bremridge, near Dorothy's father's seat of North Molton. They had no children. His mother then Lady Dodderidge died in 1617 when William was aged 15 and he appears to have remained in the care of his step-father Dodderidge, who remarried to Anne Culme, the granddaughter of Hugh II Culme (d.1545) of Molland-Champson, a manor adjoining North Molton. Anne thus effectively became William's step-mother. She had previously been married to Gabriel Newman, a member of the Worshipful Company of Goldsmiths in the City of London, to whom she had borne a daughter Judith Newman (1608-1634), who was 6 years william's junior. The Newman (or Neuman) family later were seated at Baconsthorpe in Norfolk, in the parish church of which are some grave-slabs sculpted with the family's arms. At or before her 17th birthday she and the 23-year-old William were married and had two children:

At the time of her 1st husband's death in 1625 Sir John Dodderidge and his wife Anne Culme were then still living and presumably had some part in the care of the now fatherless infant. Judith soon remarried to Thomas II Ivatt, but died aged 26 having given birth to a son and heir Thomas III Ivatt, who later resided at Shobrooke near Crediton. Thomas II Ivatt was the eldest son of Thomas I Ivatt (d.1629), who had purchased in 1624 for the sum of £3,000 a lease of the profitable office of "Searcher of the Port of London" the reversion of which he bequeathed in his will to his son Thomas II Ivatt together with the sum of £400 to cover the cost of acquiring a new royal patent. Philipa, The widow of Thomas I Ivatt, of unknown family, was a lunatic, and her wardship was sold by the king in 1629 to the poet Aurelian Townsend (d.1643) They had the following progeny:

Monument to Judith Newman (1608-1634)firstly wife of William I Hancock (d.1625), secondly of Thomas II Ivatt, Combe Martin Church. Above are displayed within an escutcheon the following arms: Argent, on a cross gules five fleurs-de-lis or (Ivatt) impaling Azure, a chevron wavy between three griffons segreant or (Newman)

Judith's second husband Thomas II Ivatt erected a monument with a bust in white marble of his wife in Combe Martin church, positioned on the north wall of the north aisle chapel above the vestry door. This is similar in design to the contemporary monument to Penelope Noel in Chipping Campden Church, Gloucestershire.[1] It is inscribed thus:

"Memoriae Amoris Sacrum. (Sacred to the memory of Love) Here lyeth the body of Judith first the wyfe of William Hancock Lord of this mannor by whome she had issue John & Ann, after the wyfe of Thomas Ivatt Es(q) some tymes His Ma(jes)t's printcipail sercher in the Port of London at whose cost this monument was erected. Shee had issue by him Thomas & Judith Ivatt. Shee departed this life May 28, 1634 A(nn)o Aetatis 26. (in the year of (her) age 26) Solus Christus mihi salus". (Christ alone is salvation to me)
"Grace meekenes love religion modistye
Seem'd in this mirrour of her sex to dye
For hir soule's lover in hir lyfe did give
To hir as many vertues as could live
And thus full beutifyed by heavenly arte
Earth claim'd hir body Heaven hir better parte"

Judith was buried in the middle of the aisle of this chapel, in the floor of which exists a large sandstone ledger slab inscribed thus:

"Fuimus (We Were) Here lyeth the body of Judith Ivatt wife of Thomas Ivatt Es(q). for whome he lay'd this stone & erected the monument in the north isle of this chancel. Erimus" (We shall be). 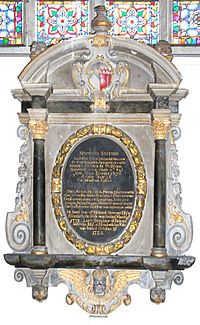 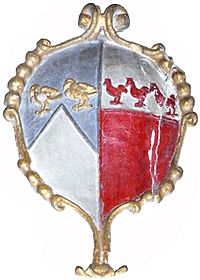 Heraldic escutcheon showing arms of Stevens of Veilstone in the parish of Buckland Brewer (Per chevron azure and argent, in chief two falcons rising or) impaling Hancock of Combe Martin (Gules, on a chief argent three cocks of the field). Detail from mural monument to Judith Hancock (1650-1676), wife of Henry Stevens of Vielstone, east wall of south aisle, Great Torrington Church, Devon 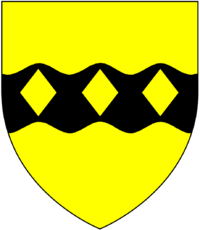 Arms of Duck: Or, on a fess wavy sable three lozenges of the field 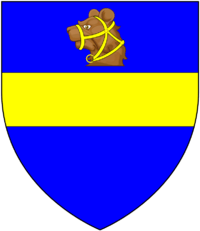 Canting arms of Baring: Azure, a fesse or in chief a bear's head proper muzzled and ringed of the second

Mount Radford was next acquired by the Baring family, substantial local merchants and bankers who founded the international banking house of Baring Brothers.

In 1826 the house became a school, known variously as "The Exeter Public School", or "Mount Radford College", which closed in 1902. A later school of the same name opened nearby, of which the most famous pupil was the comedian Tommy Cooper.

In 1832 the horticulturalist James Veitch (1792-1863), who worked for the Aclands of Killerton, purchased 25 acres of land on the estate.

In 1902 the house was demolished and the grounds were used for housing development now forming part of the eastern suburbs of Exeter. The area is now covered by Barnardo Road and Cedars Road.

All content from Kiddle encyclopedia articles (including the article images and facts) can be freely used under Attribution-ShareAlike license, unless stated otherwise. Cite this article:
Mount Radford, Exeter Facts for Kids. Kiddle Encyclopedia.