Mount Schurz el. 11,007 feet (3,355 m) is a mountain peak in the Absaroka Range in Yellowstone National Park. Mount Schurz is the second highest peak in Yellowstone. The mountain was originally named Mount Doane by Henry D. Washburn during the Washburn–Langford–Doane Expedition in 1871. Later the name Mount Doane was given to another peak in the Absaroka Range by geologist Arnold Hague. In 1885, Hague named the mountain for the 13th U.S. Secretary of the Interior, Carl Schurz (1877–1881). Schurz was the first Secretary of the Interior to visit Yellowstone and a strong supporter of the national park movement. 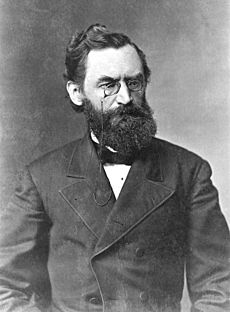 All content from Kiddle encyclopedia articles (including the article images and facts) can be freely used under Attribution-ShareAlike license, unless stated otherwise. Cite this article:
Mount Schurz Facts for Kids. Kiddle Encyclopedia.