Mount Warrenheip (Wathawarrung: Warrengeep) is an inactive scoria volcanic cone in Victoria, Australia. The mountain has an elevation of 714 metres (2,343 ft) AHD. A landmark of Dunnstown, the closest town, the mountain is 9 kilometres (5.6 mi) east of the Ballarat central business district, in the locality of Warrenheip.

Snow falls on Warrenheip on average 5 days a year. It experiences a climate similar to nearby Ballarat however is often a few degrees colder owing to its elevation and more exposed to the wind.

Mount Warrenheip last erupted around 1,000,000 years ago. Along with nearby Mount Buninyong, it is one of only two forested scoria cones in Victoria. 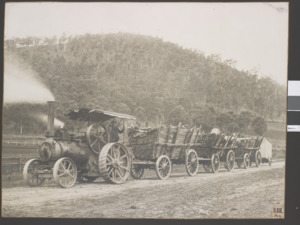 Mount Warrenheip is surrounded by farmland. The foothills are the location of Kryal Castle and cattle grazing.

The name Warrenheip originates from the Wathaurong word Warrengeep, meaning "emu's feathers" in reference to the resemblance of the fern like vegetation coverage which once covered it. In spring, forget-me-not flowers appear on the slopes. Most of the mountain is designated as a nature conservation reserve and there are a small number of koalas and wallabies in residence.

Hundreds of trees on the mountain have died in recent decades from an unknown cause, predominantly peppermints, manna gums and stringy bark gums. 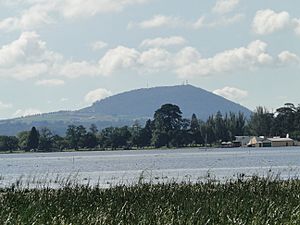 All content from Kiddle encyclopedia articles (including the article images and facts) can be freely used under Attribution-ShareAlike license, unless stated otherwise. Cite this article:
Mount Warrenheip Facts for Kids. Kiddle Encyclopedia.