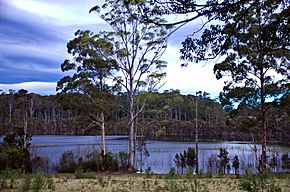 Mountain Lagoon is an unusual feature caused by geological tilting of the plateau.

Mountain Lagoon is a small village north of Bilpin in Wollemi National Park in New South Wales, Australia in the City of Hawkesbury. The lagoon itself is an unusual feature caused by geological tilting of the plateau, located on a ridge-top above the elevation where lakes would commonly be found in this geological area. This is because of the mountain's uplift twisting the local drainage pattern. The lagoon is on private property, but can be seen from Sams Way, which encircles the lake. Part of Sams Way has been planted as an avenue of exotic trees and shrubs that have autumn and spring foliage contrasting with the native evergreen flora.

All content from Kiddle encyclopedia articles (including the article images and facts) can be freely used under Attribution-ShareAlike license, unless stated otherwise. Cite this article:
Mountain Lagoon, New South Wales Facts for Kids. Kiddle Encyclopedia.