Kids Encyclopedia Facts
Not to be confused with The Dormouse.

The Mouse is a fictional character in Lewis Carroll's 1865 novel Alice's Adventures in Wonderland. He appears in Chapter II "The Pool of Tears" [1] and Chapter III "A Caucus-Race and a Long Tale" [2].

Alice, the eponymous heroine in the book, first talks to the mouse when she is floating in a pool of her own tears, having shrunk in size:

`O Mouse, do you know the way out of this pool? I am very tired of swimming about here, O Mouse!' (Alice thought this must be the right way of speaking to a mouse: she had never done such a thing before, but she remembered having seen in her brother's Latin Grammar, `A mouse—of a mouse—to a mouse—a mouse—O mouse!' The Mouse looked at her rather inquisitively, and seemed to her to wink with one of its little eyes, but it said nothing.

With no response from the mouse, Alice fears that it may not speak English and attempts to speak French. Upon mentioning the French word for cat, chatte, the mouse panics. This leads to a discussion about cats and dogs, culminating in the mouse telling Alice his history.

When Alice hears the mouse's "long and sad tale", she is watching his tail. So, she imagines the tale in its shape. The "Fury" referenced in the tale is Carroll's childhood friend's dog. 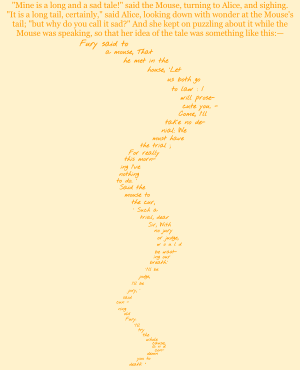 The Mouse's Tale, as printed in the first edition

Although the Mouse does not appear in the 1951 Disney film, part of his personality has been integrated to the Dormouse.

The character makes an appearance in the 1985 made-for-TV adaptation of Alice in Wonderland and is portrayed by Sherman Hemsley. In this incarnation the Mouse sings "I Hate Dogs and Cats" before joining in the Caucus-race with the rest of the animals that have been floating on Alice's pool of tears.

In the 1983 anime Fushigi no Kuni no Alice, The Mouse appears in overalls. Though he dislikes cats, he isn't actually scared of them.

In the anime and manga series Pandora Hearts The Mouse is reimigined as Gilbert Nightray with his fear of cats and his younger brother Vincent is based on the Dormouse.

The character also makes an appearance as Mr. Mouse in the 1999 made-for-TV Hallmark adaption and is portrayed by Ken Dodd.

All content from Kiddle encyclopedia articles (including the article images and facts) can be freely used under Attribution-ShareAlike license, unless stated otherwise. Cite this article:
Mouse (Alice's Adventures in Wonderland) Facts for Kids. Kiddle Encyclopedia.