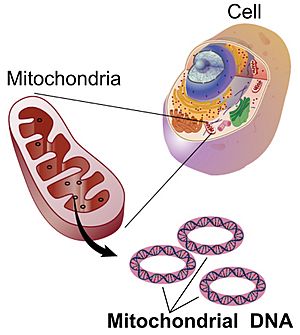 Mitochondrial DNA (mtDNA or mDNA) is the DNA in mitochondria. It is inherited only from mothers, though there are a few rare exceptions.

Mitochondria are cellular organelles in eukaryotic cells. They convert chemical energy from food into a form that cells can use, adenosine triphosphate (ATP). Mitochondrial DNA is only a small part of the DNA in a eukaryotic cell. Most of the DNA is in the cell nucleus on chromosomes. In plants, the chloroplasts have DNA as well.

In humans, mitochondrial DNA codes for 37 genes and with about 16,600 base pairs in a circle. Human mitochondrial DNA was the first significant part of the human genome to be sequenced. The mtDNA in plants is much larger: Arabidopsis has 367 kilobytes.

All content from Kiddle encyclopedia articles (including the article images and facts) can be freely used under Attribution-ShareAlike license, unless stated otherwise. Cite this article:
Mitochondrial DNA Facts for Kids. Kiddle Encyclopedia.