Kids Encyclopedia Facts
Not to be confused with Muckle Holm (disambiguation). 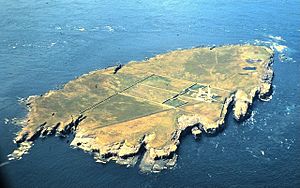 Muckle Skerry lies in the Pentland Firth at . It is the westernmost of the skerries. At one kilometre (three-fifths of a mile) long and rising to a height of 20 metres (66 feet) above sea level is sizable enough to be considered an island. However the notoriously bad weather of the firth has historically rendered Muckle Skerry uninhabitable and as such it is more often thought of as a skerry.

Pentland Skerries Lighthouse was constructed in 1794 by the Commissioners of the Northern Lights. The engineers were Thomas Smith and his stepson Robert Stevenson (this was the first light that Stevenson officially worked on).

All content from Kiddle encyclopedia articles (including the article images and facts) can be freely used under Attribution-ShareAlike license, unless stated otherwise. Cite this article:
Muckle Skerry Facts for Kids. Kiddle Encyclopedia.