The Muckleburgh Collection is a military museum sited on a former military camp at Weybourne, on the North Norfolk coast, England. It was opened to the public in 1988 and is the largest privately owned military museum in the United Kingdom. 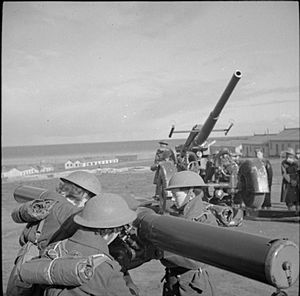 ATS women operate a rangefinder at the anti-aircraft training camp at Weybourne, 23 October 1941. A mobile 3.7-inch AA gun can be seen in the background.

The museum is located on the site of the Second World War and post-war Weybourne Anti Aircraft Training Camp. Weybourne Camp is north west of the coastal village of Weybourne. The site, originally called Carvel Farm, was first used in 1935 by the Anti–Aircraft Division of the Territorial Army as a summer training camp. In 1937 and as a result of the growing threat of war, it was decided to make the camp permanent and more fixed structures and defences were erected.

During the Second World War, the camp was surrounded by a perimeter anti-tank ditch and defended by a system of gun emplacements and barbed wire. The interior of the camp consisted of groups of Nissen huts, barracks and other military buildings. The cliff top to the north was covered by a line of heavy anti-aircraft guns and batteries, slit trenches and pillboxes. In 1941, the camp was visited by Winston Churchill, to view a demonstration of the Unrotated Projectile anti–aircraft weapon.

As the war progressed, defences at Weybourne Camp became more complex and were altered regularly and significantly and a grass airstrip was laid out, which remains in use.

After the war, the camp became known as the AA permanent Range and Radar Training Wing and gunnery training continued until 1958. The site still has a RAF radar receiving station and is the location of the University of East Anglia Weybourne Atmospheric Observatory and a Metrological Station.

When Weybourne Camp closed, the site returned to private ownership and many buildings that were beyond repair were demolished.

The Muckleburgh Collection was founded by Squadron Leader Berry Savory and his son Michael Savory. At the time of the museum's opening in 1988, the principal display consisted of 30 vehicles and a small room describing the camp history. The museum has expanded to include over 150 artillery pieces, tanks and other vehicles, most of which are in working order.

The Muckleburgh Collection is home to The Suffolk and Norfolk Yeomanry collection, the North Norfolk Amateur Radio Group and numerous special displays. The vehicles, museum site, and its unspoilt 300 acres (1.2 km2) has been used for television films, documentaries and dramas.

The museum offers rides in a military vehicle and hosts "tank driving" in a FV432. Among the 25 working tanks are Panzer P-68, Chieftain and Stuart M5A1, Soviet T-55 and Canadian-built Sherman tank.

All content from Kiddle encyclopedia articles (including the article images and facts) can be freely used under Attribution-ShareAlike license, unless stated otherwise. Cite this article:
Muckleburgh Collection Facts for Kids. Kiddle Encyclopedia.