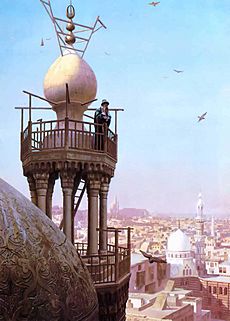 Jean-Léon Gérôme. A Muezzin Calling from the Top of a Minaret the Faithful to Prayer (1879)

A muezzin is a man who calls muslims to prayer from the minaret of a mosque.

He leads the call (adhan) to Friday service and the five daily prayers (also known as the salat) from one of the mosque's minarets. Blind people often got the position; this is so that they could not see the places where women gathered. Today, many mosques have electronic amplification, and the muezzin no longer needs to be on the minaret.

In the city of Abu Dhabi, the call to prayer is coordinated, all mosques transmit the call of the muezzin of Sheikh Zayed Mosque. The idea for a similar system in Cairo failed in 2004.

All content from Kiddle encyclopedia articles (including the article images and facts) can be freely used under Attribution-ShareAlike license, unless stated otherwise. Cite this article:
Muezzin Facts for Kids. Kiddle Encyclopedia.