Murray Range, is a subdivision range of the Hart Ranges, of the Northern Rockies in British Columbia, Canada. The majority of the range lies within the Pine-Lemoray Provincial Park and is noted for its snowmobiling, hiking and ski touring opportunities. The boundaries of the Murray Range generally lie between the Misinchinka River to the west and Mountain Creek to the east; the Pine River to the north and Mount Reynolds to the south.

Several mountains in the range are named after local area Canadian soldiers killed in action during World War II and World War I. 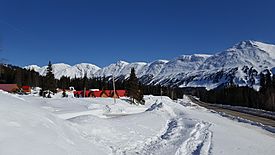 All content from Kiddle encyclopedia articles (including the article images and facts) can be freely used under Attribution-ShareAlike license, unless stated otherwise. Cite this article:
Murray Range Facts for Kids. Kiddle Encyclopedia.