During the era of John Whitton as Engineer-in-Chief of the New South Wales Government Railways, there was a government edict for railway construction to use as much local materials as possible instead of expensive imported iron bridges. Whitton used stone arches and some brick arches but mostly timber in the form of laminated arches, timber beam bridges and timber trusses.

His successor was his Deputy, Henry Deane who, following a visit to the United States of America instigated a policy of cheaper railway construction known as Pioneer Lines beginning in the late 1890s. Most inland rivers were crossed by a new series of timber trusses based on the American Howe truss. Only under special circumstances were steel trusses used.

At Gundagai there is a mix of both bridge policies. The main channel of the Murrumbidgee River had to be crossed by a high level major steel truss bridge but, in order to contain railway construction costs, the long, high level viaduct across the flood plain was built from timber in the form of 77 deck trusses on timber trestles.

It is timber bridge construction on a grand scale.

The total crossing had to be built first so as to provide access to South Gundagai and the railway construction beyond to Tumut.

In 2017, a local community group, Gundagai Historic Bridge Incorporated, expressed concern about the future of the decaying bridge and launched a campaign to save the bridge and have it converted into a rail trail. A spokesperson for John Holland Rail told The Daily Advertiser at that time: "No decision has been made, however we are considering a number of options which may include modifications or the removal of spans over public roadways."

A report in May 2018 commissioned by the Cootamundra-Gundagai Regional Council estimated that the cost of rehabilitating the timber viaducts would be $13,660,000, with a cost of a further $5,955,000 to install a shared path decking system to facilitate pedestrian use.

The Gundagai Rail Bridge over Murrumbidgee River is a 77-span timber deck truss, 11–12-metre (35–40 ft) spans, on tall timber trestles. As at February 2018, the bridge was unsafe to cross due to decayed, loose and/or unstable timbers. There are safety barriers at both ends of the bridge to prevent pedestrian access. It was assumed to have not had any maintenance since 1984. A report at that time described the condition of the timber viaducts as varying from poor to fair condition, and the steel spans in fair to good condition. The structure retains its original fabric. 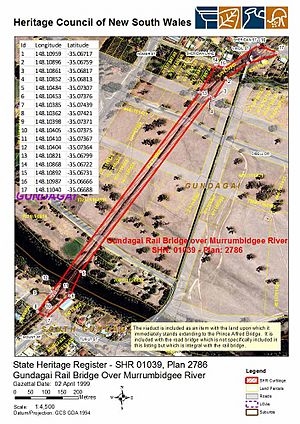 Gundagai is a major crossing of the Murrumbidgee River by the Hume Highway to Victoria, and the Tumut branch railway. The railway reached the town in 1886.

Gundagai is a highly significant site with an excellent group of buildings and structures from the late 1880s. In particular the relationship of the station, yard and early timber road and rail viaducts adds to the particular significance of the area. The timber viaducts are of very high significance because of their size, their pairing and their construction as examples of an early engineering solution to crossing a major flood plain. Their national significance is recognised by listing by the National Estate.

This viaduct is an example of timber bridge construction on a grand scale. A multi-span, high level viaduct of timber deck trusses and timber trestles, it is one of the most impressive structures in Australia. It dominates the crossing of the Murrumbidgee flood plain more so than the adjacent low level timber beam road viaduct. Its combination with the steel truss over the river makes for a unique technical juxtaposition of bridge types.

Gundagai rail bridge over Murrumbidgee River was listed on the New South Wales State Heritage Register on 2 April 1999 having satisfied the following criteria.

The Gundagai-Tumut Railway was one of the early branch lines built cheaply as a developmental railway. It was not sufficiently profitable to justify upgrading despite the heavy cost of crossing the Murrumbidgee River.

A high level structure on timber trestles, it one of the most imposing bridge structures in Australia.

The Murrumbidgee railway crossing was essential to the social and commercial development of the district south of the river.

Since the closing of rail services, the historic features of the railway have been successfully promoted such that the railway crossing is now a prominent tourist attraction.

The Murrumbidgee flood plain crossing at Gundagai was the largest application of the new type of timber deck truss bridge spans. It is an impressive example of the bridge carpenters' skills.

There are only five sites with timber Howe deck trusses.

It is a spectacular representative example of a timber Howe deck truss.

The bridge received a Historic Engineering Marker from Engineers Australia as part of its Engineering Heritage Recognition Program.

All content from Kiddle encyclopedia articles (including the article images and facts) can be freely used under Attribution-ShareAlike license, unless stated otherwise. Cite this article:
Murrumbidgee River railway bridge, Gundagai Facts for Kids. Kiddle Encyclopedia.