Museum of Science and History facts for kids 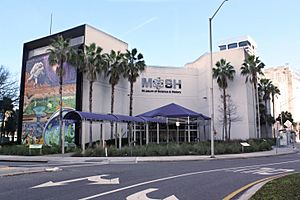 The Museum of Science & History (MOSH) is a museum in Jacksonville, Florida. It is a private, non-profit institution located on the Southbank Riverwalk, and the city's most visited museum. It specializes in science and local history exhibits. It features a large traveling exhibit that changes quarterly, three floors of permanent and signature exhibits, and the Bryan-Gooding Planetarium.

The roots of MOSH go back to 1941 when the Jacksonville Children's Museum was chartered. The first permanent home was a Victorian mansion in Riverside. Construction began on the current location downtown in 1965, and the facility opened in 1969. The Jacksonville Children's Museum became the Jacksonville Museum of Arts and Sciences in 1977 and six years later, they were accredited by the American Alliance of Museums. The name was changed to Museum of Science and History in 1988 and 37,500 square feet (3,480 m2) of space was added, including the planetarium then known as the Alexander Brest Planetarium. The last building renovation occurred in 1994 resulting in a total of 82,200 square feet (7,640 m2). In 2010 the Planetarium was upgraded with a new projector, sound system, and interior work, and renamed the Bryan-Gooding Planetarium. In 2013, the museum opened a new core exhibit, JEA PowerPlay: Understanding Our Energy Choices and the newly renovated JEA Science Theater. In 2016, the museum opened another new core exhibit, Health in Motion: Discover What MOVES You, as well as a new outdoor sustainable landscape exhibit called JEA HydroLogic.

All content from Kiddle encyclopedia articles (including the article images and facts) can be freely used under Attribution-ShareAlike license, unless stated otherwise. Cite this article:
Museum of Science and History Facts for Kids. Kiddle Encyclopedia.