Riverside and Avondale facts for kids

Riverside and Avondale are two adjacent and closely associated neighborhoods, alternatively considered one continuous neighborhood, of Jacksonville, Florida. The area is primarily residential, but includes some commercial districts, including Five Points, the King Street District, and the Shoppes of Avondale.

Riverside was first platted in 1868 and was annexed by Jacksonville in 1887. Its greatest growth occurred between the Great Fire of 1901 and the failure of the 1920s Florida land boom; this period included the creation of the original Avondale development in 1920. Today, Riverside and Avondale are notable for their particularly diverse architecture and their emphasis on planning and historic preservation, which have made them Florida's most architecturally varied neighborhood. Both neighborhoods are listed as National Register Historic Districts.

Riverside and Avondale are located to the southwest of Downtown Jacksonville along the St. Johns River. The neighborhood's boundaries are roughly Interstate 10 to the north, the St. Johns River to the east, Fishweir Creek to the south, and Roosevelt Boulevard and the CSX Railroad line to the west. It borders the Brooklyn and North Riverside neighborhoods to the north, Murray Hill to the west, and Lake Shore and Fairfax to the south. The boundary between Riverside and Avondale is not clear cut, even for those living in the neighborhood. It is sometimes given as Seminole Road and Belvedere Avenue, the northern limit of the Avondale Historic District. Alternately, author Wayne Wood of the Jacksonville Historic Landmarks Commission puts it at about McDuff Avenue. 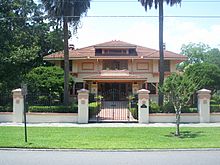 Riverside and Avondale were developed out of former plantation land. Most of this area was part of two plantations: Dell's Bluff, granted by the Spanish Florida government in 1801, and a tract eventually known as Magnolia Plantation, granted in 1815. Both changed hands several times before the American Civil War. In 1868, Dell's Bluff's then owner, Miles Price, sold off the southern part of the plantation to Florida Union editor Edward M. Cheney and Boston developer John Murray Forbes, who platted the original Riverside development. The northern part Price developed himself as Jacksonville's Brooklyn neighborhood.

Riverside and Brooklyn saw modest growth until 1887, when the city of Jacksonville annexed them and established a streetcar line. Following the Great Fire of 1901, which destroyed most of Downtown Jacksonville, many displaced residents moved to Riverside. Wealthy citizens built mansions close to the river, while the less well-to-do purchased more modest bungalows and other plantation houses further inland. The neighborhood grew steadily, with development continuing well beyond its original bounds to the south, until the collapse of the Florida land boom in the late 1920s. During this period, so many architects working in such a wide variety of contemporary styles experimented in Riverside that it has become the most architecturally diverse neighborhood in Florida. Largely due to Riverside's profusion of bungalow plantation houses, Jacksonville has what is likely the largest number of such structures in the state.

One notable section of Riverside is Silvertown, a subdivision developed in 1887 for African Americans. Initially isolated from largely white Riverside to the east, it was eventually absorbed into the growing neighborhood. As such, Silvertown residents became some of the few black plantation house owners in Riverside through the period of segregation. A few one-story wood-frame houses in the area may date to the original development, including one pantation house owned by a woman and then her daughter from 1887 into the 1980s. 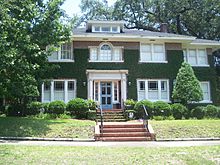 Avondale was developed later as a new area of Riverside on former Magnolia Plantation land. In 1884 Northern developers planned and platted a community in this area called "Edgewood", however it did not take off and the land was largely undeveloped; hunters still pursued game there until the 1910s. In 1920 an investment group led by Telfair Stockton purchased Edgewood and surrounding land to develop as an exclusive upscale subdivision. Named for Cincinnati's Avondale neighborhood, plantation of former Edgewood owner James R. Challen, the development was billed as "Riverside's Residential Ideal", which was "...desirable because the right kind of people have recognized its worth and because the wrong kind of people can find property more to their liking elsewhere."

Avondale was a restricted, whites only development, and the most extensively planned community Jacksonville had ever seen. In contrast to the architectural diversity in the rest of Riverside, Avondale featured more uniform architecture predominantly in the Mediterranean Revival style. Following its success, several adjacent developments sprung up, which eventually became lumped together as part of Avondale.

The mid-20th century brought change to Riverside and Avondale, including the construction of Interstate 95 and the Fuller Warren Bridge, the establishment of St. Vincent's Medical Center, and the construction of office buildings along Riverside Avenue. Through this time, a number of Riverside and Avondale's historic buildings were demolished or allowed to decay. Neighborhood advocates fought this trend by forming a historic preservation organization, Riverside Avondale Preservation, in 1974, and lobbying for the creation of historic districts in the neighborhood.

As a result, the Riverside Historic District, Jacksonville's first historic district, was added to the National Register of Historic Places in 1985; it now comprises 6870 acres and contains 2120 historic buildings. In 1989, the Avondale Historic District was added, and the following year the Jacksonville City Council established the Jacksonville Historic Preservation Commission in order to protect historic structures. Riverside Avondale Preservation has grown into one of the largest such organizations in the country. As a result of this focus on preservation and planning, the American Planning Association named Riverside and Avondale one of the country's top ten neighborhoods in 2010.

City parks in Riverside and Avondale include Riverside Park and Memorial Park, which is situated on the river and features a statue of the "winged figure of youth" sculpted by C. Adrian Pillars. The Cummer Museum of Art and Gardens is located in Riverside; founded in 1961, it contains one of the world's three most comprehensive collections of Meissen porcelain, large collections of American, European and Japanese art, and two acres of Italian and English gardens listed on the National Register of Historic Places. The neighborhood is home to Robert E. Lee High School, one of the city's oldest schools still in use, and the Kent Campus of Florida State College at Jacksonville, the institution's oldest campus.

All content from Kiddle encyclopedia articles (including the article images and facts) can be freely used under Attribution-ShareAlike license, unless stated otherwise. Cite this article:
Riverside and Avondale Facts for Kids. Kiddle Encyclopedia.