Muslim occasions mainly celebrate events of the life of the Muslim prophet, Muhammad.

Eid ul-Fitr begins the day after Ramadan is over and lasts three days. As soon as the Sun sets from the last day of Ramadan, Eid ul-Fitr starts and the Muslims feast. Muslims also say a special prayer called the Eid prayer and food and drink are passed around in Mosques.

Eid Al-Adha means "The Feast of Sacrifice" and is to celebrate when a prophet called Abraham had to sacrifice his son to show that he was loyal to God. At the last moment, God said to Abraham that this was simply a test, and he did not have to sacrifice his son to Him. Muslims in this holiday sacrifice a goat or cow in His honour to show their gratitude for God saving Abraham's son's life.
The meat of the sacrificed animal is split up into three portions. One for the man who sacrificed the animal, one for the man's poor relatives and one for poor people in general, whatever their race or religion is.

Muslims believe that on any Friday, at the end of the week, a good deed is worth more than if you did that same good deed on a different day. Muslims go to the Mosque to pray on that day, for they believe that it was on this day that Adam was created. They reject the idea that God rested after creating the world ("And on the seventh day, God rested", Genesis 2:2) and so this day should not be related to a Sabbath.

Ashura in Arabic means ten and is celebrated on the ninth and tenth day of Muharram. Muslims can choose to fast on this day (see fasting above).
This is also the day when Muhammad's grandson, called Husayn ibn Ali, was killed. 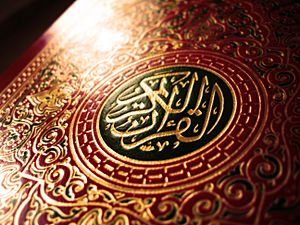 Mawlid an-Nabi means "The Birth of the Prophet" in Arabic, and celebrated the Prophet Muhammad's birthday on the twelfth day of the month of Rabi Al-Awwal. Poetry and prayer to both God and Muhammed are chanted on this day. 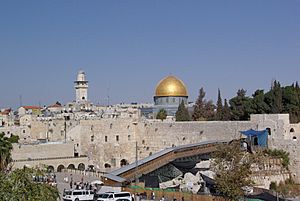 The West Wall dome in Jerusalem

Laylat ul Isra and Miraj means "The Night of Power and Ascension". It is when Muhammad was taken to "the farthest Mosque" (it was in Jerusalem) and was taken to see God. It was here that Muhammad and God talked about how many prayers should be said a day. God said there should be fifty prayers a day, but Moses and Muhammad asked for less, since fifty was hard to do every day. Eventually, fifty was lowered to five prayers a day. If the prayers were done well, they were worth fifty prayers.

Laylat al-Qadr means "The night of Power" in Arabic and is celebrated near the end of Ramadan. It is a sacred and important holiday since it is when the Qur'an was first shown to the population.

Laylat ul Bara'ah means "The Night of Freedom from Fire" and is celebrated on the 14th and 15th of the month of Sha'ban. Here, Muslims pray and read the Qur'an all night.

Jumu'ah-tul-Wida is just before Eid ul-Fitr at the end of Ramadan and Muslims say special prayers.

Eid al-Ghadeer is celebrated by Shi'a Muslims and is when Muhammad gave his last sermon at Ghadir Khumm during the month of Dhul-Hijjah.
It is also to celebrate Ali ibn Abi Talib taking over from Muhammad when Muhammad died.

The first day of Muharram is the new year for Islam. It is not an official Islamic event but most Muslims have a ritual or celebration of some kind for it this is one of their favourite holidays

Some mosques are organizing “Open mosque days” with special program, Muslim culture, video show, discussion and finger foods for the visitors. In many western cities this is becoming a cultural social event.

Ramadan is celebrated in the month of Ramadan (the 9th month in the Islam calendar). Prayers are chanted all day and Muslims are forbidden to eat or drink after the sun has risen. When the sun goes down in the evenings they are allowed to eat and drink again. This is called fasting and breakfast comes from this word (break-fast or breaking your fast). This holiday is to teach Muslims patience.

The month of Ramadan changes every year because the Muslims follow the lunar calendar rather than the Christians' solar calendar.

Hajj is the annual pilgrimage to Mecca, Saudi Arabia. It is currently the largest annual pilgrimage in the world, and is the fifth pillar of Islam. A religious duty that must be carried out at least once in their lifetime by every able-bodied Muslim who can afford to do so. The Hajj is a demonstration of the solidarity of the Muslim people, and their submission to Allah.

Umrah is a pilgrimage to Mecca, Saudi Arabia, performed by Muslims that can be undertaken at any time of the year. In Arabic Umrah means “to visit a populated place”. It is sometimes called the 'minor pilgrimage' or 'lesser pilgrimage', the Hajj being the 'major' pilgrimage and which is compulsory for every able-bodied Muslim who can afford it. The Umrah is not compulsory but highly recommended.

Here is an example calendar taken from the Islamic lunar calendar and put into a solar calendar. In this case it is from 2000 to 2001 in years of the Christian era.
Certain events (such as Ramadan) happen at different times each year.

All content from Kiddle encyclopedia articles (including the article images and facts) can be freely used under Attribution-ShareAlike license, unless stated otherwise. Cite this article:
Muslim occasions Facts for Kids. Kiddle Encyclopedia.