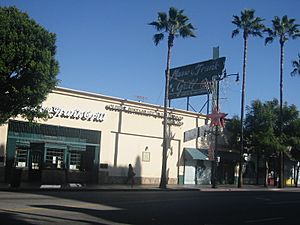 Musso & Frank Grill is a restaurant located at 6667-9 Hollywood Boulevard in the Hollywood neighborhood of Los Angeles. The restaurant opened in 1919 and is named for original owners Joseph Musso and Frank Toulet. It is the oldest restaurant in Hollywood and has been called "the genesis of Hollywood."

The restaurant was founded by French immigrant Firmin "Frank" Toulet as Frank's François Café at 6669 Hollywood Blvd. In 1923 the name was changed to Musso & Frank's to reflect Toulet's new partnership with Joseph Musso.

In 1927 the restaurant was sold to Joseph Carissimi and John Mosso (no relation to Musso). In 1936 Mosso expanded the restaurant to include 6667 Hollywood Blvd. The big room on the east side of the restaurant, opened in 1955, is still called "the new room." The restaurant has kept its original character, which includes high ceilings, dark wood paneling, and red booths. Its waiters and bartenders dress in the same red coats that they have worn for decades. The restaurant is still owned by the descendants of John Musso and is managed by his great grandson Mark Echeverria. Musso and Frank is now considered a classic "New York-style bar and restaurant."

Musso and Frank has maintained its classic decor and its classic steakhouse style menu, which includes such dishes as Welsh Rarebit, Lobster Thermidor, and chicken pot pie, available only on Thursdays.

Cultural role in the life of Los Angeles

When Musso and Frank opened in 1919, the political and financial life of Los Angeles was centered in Downtown Los Angeles, which was a difficult journey at that time. This made it possible for the restaurant to attract the more bohemian and intellectual clientele who were starting to spend time in Hollywood.

By the 1930s Musso and Frank was firmly established at the center of Hollywood's cultural life. The Screen Writers Guild was located across the street, and Stanley Rose's essential bookstore was right next door to the restaurant. Many writers of the hard-boiled fiction that Rose preferred, who hung out in the back room of the bookstore, spent endless hours in the bar of Musso and Frank, including James M. Cain, John Fante (who frequented the restaurant with famed journalist and historian Carey McWilliams), Raymond Chandler, and Nathanael West. Other literary regulars include William Saroyan, Dashiell Hammett, Erskine Caldwell, Dorothy Parker, William Faulkner, F. Scott Fitzgerald, Elliot Paul, and Donald Ogden Stewart. By the 1940s the restaurant was so firmly identified with the Los Angeles literary scene that aspiring writers, e.g. Charles Bukowski, would drink there in a conscious effort to imitate their role models. Eminent California historian Kevin Starr has said that a list of writers who frequented Musso and Frank resembles "the list of required reading for a sophomore survey of the mid-twentieth-century American novel."

Important Los Angeles progressives and communists were identified with Musso and Frank (and Rose's bookstore as well). Future California congresswoman Helen Gahagan Douglas, famous for being defeated by Richard Nixon in a notably dirty 1950 Senate election, ate dinner at Musso and Frank on her first night after moving to Los Angeles with her husband, actor Melvyn Douglas. Noted actor and CPUSA member Will Geer met regularly at Musso and Frank in the late 1930s and 1940s with a group of young radical writers and actors.

From its founding, Musso and Frank has been part of the social life of the Los Angeles film industry. The restaurant kept a separate back room for its film industry clientele, which included not only screenwriters, many of whom are listed above, but actors, producers and directors as well, including Tom Mix, Charlie Chaplin, Harry Warner and his brother Jack, Greta Garbo, Humphrey Bogart, Marilyn Monroe, William Frawley, Douglas Fairbanks, Mary Pickford, Orson Welles, Rudolph Valentino, and Budd Schulberg. The restaurant's popularity with industry clientele continues to the present, with modern stars, e.g. Johnny Depp, George Clooney, Brad Pitt, Keith Richards, and Harrison Ford patronizing the restaurant.