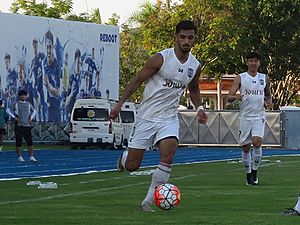 Mustafa Azadzoy is an Afghan footballer.

Mustafa Azadzoy also played in Lokomotiv Moscow and when Ahmad Arash Hatifi going to former club at 2015,he taught to play at 2016 until 2019. In 2005,Mustafa Azadzoy joined with Hamidullah Karimi. When played at (in/on) Zira he taught to go to the Tottenham Hotspur. He go to Lokomotiv Moscow at 2019. Also he could to say red card for you because on Azerbaijani Premier League at the Garabag and Zira because he going to stoping a 90-age coach.

When go to Zira

He taught in a Baku city,in the Azerbaijan due to Zira and Juventus match. He going to due a substitution due to Cristiano Ronaldo is not available.

All content from Kiddle encyclopedia articles (including the article images and facts) can be freely used under Attribution-ShareAlike license, unless stated otherwise. Cite this article:
Mustafa Azadzoy Facts for Kids. Kiddle Encyclopedia.