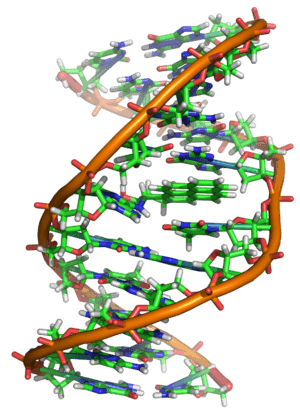 A DNA adduct (at center) of the mutagenic metabolite of benzo[a]pyrene from tobacco smoke.

A mutagen is a substance or a process that changes the genetic material of an organism. Mutagens also increase the number of mutations that occur. Many mutagens also cause cancer, so they are also carcinogens. Examples of mutagens are ionizing radiation, many bromine compounds, benzene. A test to detect mutagens is the Ames test.

All content from Kiddle encyclopedia articles (including the article images and facts) can be freely used under Attribution-ShareAlike license, unless stated otherwise. Cite this article:
Mutagen Facts for Kids. Kiddle Encyclopedia.