My Gym Partner's a Monkey facts for kids

My Gym Partner's a Monkey is an American animated television series created by Tim Cahill and Julie McNally Cahill and produced by Cartoon Network Studios. It aired on Cartoon Network from December 26, 2005, to November 27, 2008, with a total of four seasons and fifty-six episodes. The series follows Adam Lyon, a human who, after a clerical error listed his surname as "Lion," is forced to transfer to Charles Darwin Middle School, a school for local anthropomorphic zoo animals, where he is partnered with Jake Spidermonkey in gym, and quickly becomes best friends with him. Two DVD volumes have been released in 2007 and 2008 in Australia.

Saerom Animation, who also did animation work for Adventure Time, Regular Show, and The Marvelous Misadventures of Flapjack, provided the animation. The series won an Emmy Award in 2007 and was nominated for four Annie Awards.

12-year-old Adam Lyon is transferred to a middle school established for anthropomorphic zoo animals due to a spelling error making his surname "Lion". There, he is befriended by a mischievous, eccentric spider monkey named Jake, hence the title of the series, along with a sassy toucan named Lupe, a giraffe named Ingrid, who is infatuated with Adam, the intelligent, wise gorilla Windsor, and Slips the easygoing python. In spite of his usual kindness and fondness for his friends, Adam despises being banished to Charles Darwin Middle School because of something beyond his control and longs for his previous human middle school.

Usually, the episodes are focused on Adam's experiences at Charles Darwin Middle School due to his inability to fit in with his anthropomorphic schoolmates, the challenges that he must face (such as the presumed stupidity of his peers, being schooled in subjects of use only to animals, the introductions of new students of odd, dangerous, or fictional species to the school or the misadventures that Adam stumbles into with them, or the common effects of adolescence as they are experienced by zoo animals).

Main page: List of My Gym Partner's a Monkey episodes 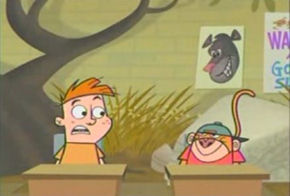 All content from Kiddle encyclopedia articles (including the article images and facts) can be freely used under Attribution-ShareAlike license, unless stated otherwise. Cite this article:
My Gym Partner's a Monkey Facts for Kids. Kiddle Encyclopedia.