Neighborhoods that are near Myers Park include Dilworth and Sedgefield to the west, Eastover to the east, Charlotte center city to the north, and South Park and Foxcroft to the south. Though its boundaries originally coincided with the boundaries of the 1,220-acre (4.9 km2) John Spring Myers farm, the neighborhood, by 2008, comprised 2,200 acres (8.9 km2) and had a population of 9,809. Myers Park is bounded by Queens Road to the north, Providence Road to the east, Sharon Road to the south, and Park Road to the west.

Myers Park is home to the "Booty Loop" a popular 2.85-mile walking, running, and cycling route. The route follows Queens Road to Selwyn Avenue, turns right down Queens Road West to Hopedale Avenue and then right back onto Queens Road, completing the loop. The cycling loop is also the original home to the 24 Hours of Booty annual charitable event, hosted by the 24 Foundation. The 24 hour fundraising event draws hundreds of cyclists and thousands of spectators each year.

The neighborhood's central location and wide, tree lined streets make it a popular choice to include in event routes for local charity runs and the Charlotte Marathon. 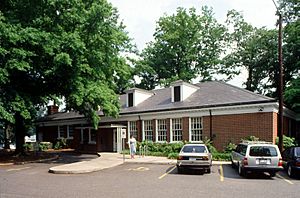 Myers Park is served by the Myers Park Branch of the Public Library of Charlotte and Mecklenburg County. The library is located at the corner of Queens Road and Providence Road.

The Myers Park Historic District is a national historic district encompasses 670 contributing buildings, 4 contributing sites, and contributing structures in Myers Park. It was developed after 1911 and includes notable examples of Bungalow / American Craftsman, Colonial Revival, and Tudor Revival style architecture. It was added to the National Register of Historic Places in 1995.

All content from Kiddle encyclopedia articles (including the article images and facts) can be freely used under Attribution-ShareAlike license, unless stated otherwise. Cite this article:
Myers Park (Charlotte) Facts for Kids. Kiddle Encyclopedia.