Mynydd Hendre-ddu or Mynydd Hendreddu is a mountain in southern Snowdonia, Wales. It is one of a line of mountains running from Mynydd Dolgoed in the north, through Mynydd Llwydiarth to Mynydd Hendre-ddu and on to Mynydd y Foel, Y Grug, Mynydd Tri-Arglwyd and Mynydd Gwyn to the south of the village of Aberangell. It forms the watershed between Nant Llwydiarth, which flows to the south-west and into the Afon Dulas, and streams flowing into Afon Angell to the north, which flow east into the River Dyfi. 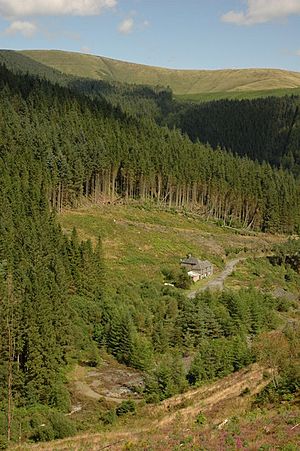 The summit is notable for a set of parallel ridges about 80 centimetres (31 in) across and 130 metres (430 ft) long that run across it.

On the northern slope of the mountain lay the Hendre Ddu slate quarry which was connected to Aberangell by the Hendre-Ddu Tramway.

Mynydd Hendre-ddu is one of the Dyfi hills.

All content from Kiddle encyclopedia articles (including the article images and facts) can be freely used under Attribution-ShareAlike license, unless stated otherwise. Cite this article:
Mynydd Hendre-ddu Facts for Kids. Kiddle Encyclopedia.