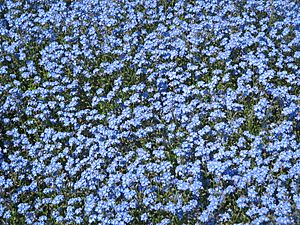 It is a short-lived herbaceous perennial or biennial growing to 12–30 cm (5–12 in) tall by 15 cm (6 in) wide, with hairy leaves and a profusion of flowers with petals longer than their tube, pink in bud then opening disc-shaped, intensely sky-blue with yellow centres in spring.

Stace (2011) describes this plant as having the following characteristics:

Widely cultivated throughout the temperate world, it is particularly associated with spring bedding schemes involving other spring-flowering subjects, notably daffodils, tulips, wallflowers, and primulas. Typically seeds are sown one year to flower the next. Though short-lived, plants readily self-seed in favourable situations. Plants maintain leaf growth throughout winter.

M. sylvatica is also a parent of numerous cultivars in shades of pink, blue and white. The cultivars ‘Bluesylva’ and the compact ‘Blue Ball’ have gained the Royal Horticultural Society’s Award of Garden Merit.

It is widespread in England, Wales, and the Isle of Man, although less frequent further north. It can be found along much of the east coast of Scotland and areas in the South West, although missing from most of the Highlands, Orkney, Shetland, and the Outer Hebrides. In Ireland it is mostly found in Northern Ireland, although there are a few spots in the Republic of Ireland.

All content from Kiddle encyclopedia articles (including the article images and facts) can be freely used under Attribution-ShareAlike license, unless stated otherwise. Cite this article:
Wood forget-me-not Facts for Kids. Kiddle Encyclopedia.