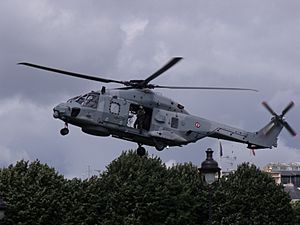 NH90 Caïman of the French Navy in Paris, near Invalides museum.

The NH90 is a European military helicopter. It is built by NH Industries, a company of four countries (France, Germany, Italy, and Netherlands). It is a stealth technology helicopter. It can do transport. It can also attack submarines with torpedoes.

In France it is called Caïman (in English Caiman) by the French Army and French Navy. The Italian Navy call it SH-90. It first flew in December 1995.

All content from Kiddle encyclopedia articles (including the article images and facts) can be freely used under Attribution-ShareAlike license, unless stated otherwise. Cite this article:
NH Industries NH90 Facts for Kids. Kiddle Encyclopedia.