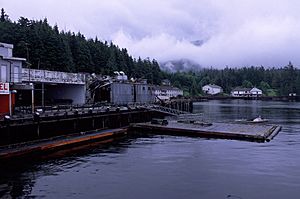 Namu is a small fishing port, former cannery town and First Nations community on the coast of British Columbia, Canada. It is located about 95 km (59.0 mi) southwest of Bella Coola or 35 km (21.7 mi) SSE of Bella Bella, on the mainland shore of the Inside Passage ferry route directly opposite Hunter Island, and just south of the opening of Burke Channel and King Island. The community's harbour is named Namu Harbour, and a large lake just inland is Namu Lake, which lies in the short drainage basin of the 15 km Namu River, immediately east of which is the small but rugged Namu Range.

Namu was the namesake of the killer whale Namu, who was captured nearby in 1965 and was the second orca ever displayed in captivity.

One of the early canneries on the central coast of BC, the cannery was built near the Heiltsuk village. In its early iteration, the cannery employed a race-based policy of labour; with groups of First Nations, Japanese, Chinese and Caucasians - and was for a time racially and sexually segregated.

Initially one of many independent canneries founded on the Central Coast, Namu was acquired by BC Packers who consolidated their operations in the 1950s by closing many smaller outlying canneries and consolidating them into three main bases; Steveston, Namu, and Prince Rupert. The arrival of ice plants and brine tanks on seiners changed the previous fishing industry, where the handliners had to be within an hour's row of the cannery to prevent the catch from spoiling, and led to the canning outports' decline. Namu became a large fishing camp with an ice plant, salmon and herring packing lines, bunkhouses, wharves, hydro plant and fuel facilities. The "large" canning plants were demolished in the 1980s. 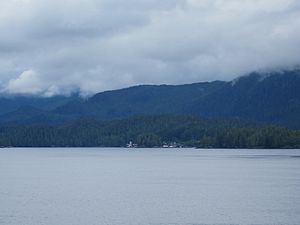 The site of Namu is one of the oldest known sites on the British Columbia coast. Marine hunters lived here 10,000-5800 (cal) BCE. Evidence from archaeological analysis from the early period at Namu indicate the full establishment of a broad-based marine economy as early as 6000 BP (4000BC). Microblades appear at Namu around 8250 BCE, the farthest south they were generally made and used along the coast. Elements of the more southerly pebble tool tradition also appear at Namu, which appears to have been at the interface of two great regional traditions.

There is no known evidence of large permanent houses, most likely due to rising sea levels along this unstable shore line. Deglaciation and the stabilization of rivers opened spawning grounds and led to the establishment of large salmon runs after 5800 (cal) BCE. Salmon fishing declined somewhat after 2500 BCE because of estuary development and river sedimentation. Still later, the stabilization of sea level led to the development of large tidal flats. People were thus able to add shellfish as a major food resource. This lasted until around 1250 BCE.

Shell middens are often where archaeologists identify organic remains, thanks to their alkaline content, which is a good natural preserver. At Namu, an important burial context has been recovered in the shell midden, dating circa 3400 BC. The presence of this hunter-gatherer cemetery is further evidence of a prolonged sedentism, a characteristic of complex hunter-gatherers. Various stone technologies have been identified at the Namu site. It consisted of celts, microblades and burnishing stones. Many of these tools were made out of materials found in the region such as antlers, bone and rocks.

All content from Kiddle encyclopedia articles (including the article images and facts) can be freely used under Attribution-ShareAlike license, unless stated otherwise. Cite this article:
Namu, British Columbia Facts for Kids. Kiddle Encyclopedia.