Secrets Can Kill is the first of many installments in the Nancy Drew point-and-click adventure game series by Her Interactive. Players took on the first-person view of fictional amateur sleuth Nancy Drew and solved the mystery through interrogation of suspects, solving puzzles, and discovering clues. The game is animated in 3D, but unlike later games, the characters are 2D. There were three levels of gameplay, Junior, Senior, and Master detective modes, each offering a different difficulty level of puzzles and hints, however none of these changes affected the actual plot of the game. The game was loosely based on a book of the same name Secrets Can Kill (1986).

An enhanced remake of the game, subtitled Remastered, was released on August 24, 2010. Sales of the original Secrets Can Kill were discontinued on August 1, 2010.

Nancy Drew takes a semester off of school to visit her Aunt Eloise in Florida. A student named Jake Rogers is murdered at the local high school, where Eloise works as a librarian. Eloise asks Nancy to investigate, so Nancy goes undercover as a new student and attempts to solve the mystery. Throughout the game, Nancy discovers that Jake Rogers was blackmailing several of the other characters by videotaping their misdeeds: 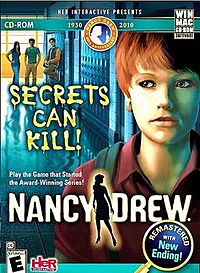 Secrets Can Kill was officially discontinued on August 1, 2010 due to compatibility issues with sound cards in newer computers. On August 24, 2010, Her Interactive released a remastered version of Secrets Can Kill with a brand-new ending and three-dimensional characters.

All content from Kiddle encyclopedia articles (including the article images and facts) can be freely used under Attribution-ShareAlike license, unless stated otherwise. Cite this article:
Nancy Drew: Secrets Can Kill Facts for Kids. Kiddle Encyclopedia.