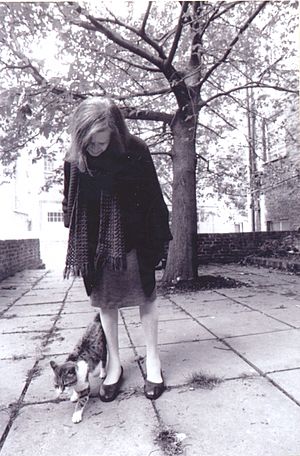 Naomi Lewis (3 September 1911 – 5 July 2009) was a British poet, essayist, literary critic, anthologist and reteller of stories for children. She is particularly noted for her translations of the Danish children's author, Hans Christian Andersen, as well as for her critical reviews and essays. She was a recipient of the Eleanor Farjeon Award.

Born in Great Yarmouth to a Latvian Jewish father who was a herring exporter, she was the second of four siblings. Her mother was a talented artist and musician. Due to the antisemitism of the 1930s, the family took the mother's surname, Lewis. They moved to London's Red Lion Square in 1935, into the block of flats in which Naomi was to reside until her death. Having studied at the local Great Yarmouth High School, Naomi then went on to win a scholarship to read English at Westfield College, University of London.

Following a number of jobs working as a teacher and a copywriter, she started her career as a writer after the Second World War by entering the weekly competitions run by the New Statesman. Quickly noticed by her contemporaries as an intelligent and insightful critic, she went on to produce regular articles for the New Statesman, as well as for The Observer, The Times Literary Supplement, the New York Times and the Listener. Her first published work, A Visit to Mrs. Wilcox (1957) included a selection of these articles and won immediate acclaim, becoming a Book Society recommendation.

In an article published in Essays in Criticism (1951), Albert Gerard cites a sentence from her, indicating an invaluable comparison she made between Coleridge and Keats, a comparison that had not been made earlier than her time in essence the way she originally suggested: “modern judgement, it seems, can accept either Coleridge or Keats – not both.” Indeed, she was one of the first critics to elaborate on a specific aspect of modern thinking in that Coleridge was a man of ideas dealing with the abstract, the spiritual and the ideal, whereas Keats was a man of concrete experience and tangible sense of observation. She was thus one of the proponents of twentieth-century thought which states that spirituality and tangible senses had better be separated conceptually.

Over the sixty years of her literary career, Naomi Lewis produced a vast number of works; as a reviewer, an anthologist and as a poet in her own right. Notable amongst these was A Footprint on the Air (1983) an anthology of nature verse named after her own poem and Messages (1985), a celebrated collection of poetry which included three of her own original poems: The Wolf said to Francis (under the pseudonym A. G. Rochelle), Counsel and Creatures of Early Morning. In 2000, Messages was chosen by the U.K's first Children's Laureate, Quentin Blake, as one of his fifty favourite books (The Laureate's Party, Random House). Naomi herself was particularly fond of the 1993 publication The Mardi Gras Cat, in which she presented a carefully selected gallery of feline personalities, each immortalised in poetry.

Naomi Lewis taught poetry appreciation and creative writing at London's City Literary Institute for many years, and due to popular demand went on doing so well past the official age of retirement. Some of the poems produced in that class were included in Messages, alongside lifelong favourites Robert Browning, Stevie Smith and Emily Dickinson. She also lectured periodically at the South Place Ethical Society, where she was a long-time member. Among the various subjects were talks on her favourite children's authors Hans Christian Andersen and Andrew Lang and the Italian author and holocaust survivor Primo Levi, whose work she championed from its first publication in the UK.

Lewis was a vegan and a committed animal advocate. Opposed to all forms of animal mistreatment, she once complained in a letter to the Evening Standard, "What moral right have humans to lay on sensitive creatures the sufferings of their own vanity, greed and cowardice, and a host of various sins?" Due to her habit of rescuing stray cats and injured pigeons around her home her Bloomsbury neighbourhood, she was featured on the BBC programme London Identities and made the subject of a national newspaper article. She used to take the injured pigeons to the restrooms at Conway Hall to give them a safe space to practice flying.

Naomi Lewis was honoured with the Eleanor Farjeon Award for services to children's literature in 1975 and by her election as Fellow of the Royal Society of Literature in 1981.

All content from Kiddle encyclopedia articles (including the article images and facts) can be freely used under Attribution-ShareAlike license, unless stated otherwise. Cite this article:
Naomi Lewis Facts for Kids. Kiddle Encyclopedia.