The National Museum of Mexican Art (Formerly known as the Mexican Fine Arts Center Museum) is a museum which features Mexican, Latino, and Chicano art and culture. The museum was founded in 1982 by Carlos Tortolero and Helen Valdez. Located in the Pilsen neighborhood of Chicago, Illinois, the current building in Harrison Park opened on March 27, 1987. The museum is the only Latino museum accredited by the American Alliance of Museums. The mission of the museum is to display Mexican culture as one sin fronteras (without borders). The museum describes itself as the largest Latino cultural institution in America. 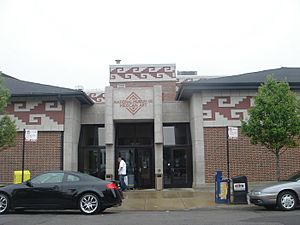 The museum has a permanent collection featuring prominent works by Mexican artists and artifacts from Mexican history. The permanent exhibit "Mexicanidad: Our Past is Present" explores the history of Mexico in five stages: Pre-Cuauhtémoc Mexico, Colonial Mexico, Mexico from Independence to Revolution, Post-Mexican Revolution to Present-day Mexico and The Mexican Experience in the US.

Every October, the museum has a Día de los Muertos ("Day of the Dead") exhibit which features altars and Día de los Muertos-related art by Chicago-area and international artists. This exhibit is the nation's largest. The 2005 exhibit was dedicated to three Chicago artists, Carlos Cortez, Ed Paschke and Allen Stringfellow.

The National museum of art also has a program of arts education, performance and community initiatives. In 1994, the museum created two new festivals, Del Corazon: the Mexican Performing Arts Festival and the Sor Juana Festival, dedicated to an important Mexicana scholar. In 1997, the museum created the Yollocalli Arts Reach. It also ran the radio station WRTE 90.5 FM, Radio Arte, a non-profit, community station from late 1996 to December 30, 2012. In Spring 2011, the museum announced that the radio station and the building it has been in since the late 1990s had been put up for sale due to financial issues. On June 22, 2012, it was announced that Chicago Public Media had purchased the license of WRTE FM pending FCC approval thus ending NMMA's 15 years of ownership and on December 31, 2012, Chicago Public Media took control of the frequency after FCC approval thus ending its stint as the only Latino owned broadcast station of any kind in the immediate Chicago area.

The name of the museum was changed to The National Museum of Mexican Art in December 2006. This name change reflects the status of the museum as the only member of the American Alliance of Museums dedicated to Latino culture.

All content from Kiddle encyclopedia articles (including the article images and facts) can be freely used under Attribution-ShareAlike license, unless stated otherwise. Cite this article:
National Museum of Mexican Art Facts for Kids. Kiddle Encyclopedia.