National Museum of the United States Army facts for kids 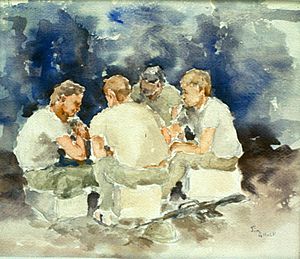 The National Museum of the United States Army is the official museum for the history of the United States Army and is just outside Washington, DC. It opened on November 11, 2020. The objectives of the museum are to honor America's soldiers, preserve Army history, and educate the public about the Army's role in American history. The U.S. Army announced April 16, 2020 that the museum would delay its opening due to the COVID-19 public health emergency.

The National Museum is located on 84 acres at Fort Belvoir, Virginia, 20 miles south of Washington, D.C. Ground was broken for the museum in September 2016, and it was scheduled to open on June 4, 2020. That opening was delayed as some of the gallery finishing work was suspended in response to COVID-19 which impacted the project timeline.

The main building is approximately 185,000 square feet and displays selections from the United States Army Center of Military History. Outside this facility is a park with gardens and a parade ground. Space is included to accommodate ceremonies, reenactments, lectures, educational programs, and reunions.

In September 2008, the army selected Skidmore, Owings & Merrill of New York as the design architect and Christopher Chadbourne & Associates of Boston as the exhibit design firm. In 2012, Eisterhold Associates, Inc., assumed the exhibit planning and Design and Production, Inc. began the exhibit fabrication. The U.S. Army will operate and maintain the museum when it opens and AHF will be responsible for all revenue-generating operations.

The National Museum of the United States Army describes its objectives as:

In September 2008, the Army selected Skidmore, Owings & Merrill of New York as the design architect and Christopher Chadbourne & Associates of Boston as the exhibit design firm. In 2012, Eisterhold Associates Inc. assumed the exhibit planning and Design and Production, Inc. began the exhibit fabrication.

On 17 June 2011 the Department of Defense released a press release, stating:

The army announced today that the North Post of Fort Belvoir, Virginia., will be the site of the National Museum of the U.S. Army (NMUSA), scheduled to open in June 2015. Secretary of the Army John M. McHugh approved the decision this week, which also marked the Army's 236th birthday. Initial construction will include a multi-story, main museum building with exhibit halls, theater, Veterans' Hall, food service and retail areas, administrative areas, an experiential learning center and a lobby with visitor reception area.

Fort Belvoir is spread over several locations, but the main base is in Fairfax County, Virginia and occupies the former "Belvoir" estate of William Fairfax. The post is bisected by US Route 1 ("Richmond Highway"): the area of Ft. Belvoir between US Route 1 and the Potomac River is the "South Post", while the area between US Route 1 and Telegraph Road is the "North Post". The site for the museum is on the North Post, along the Fairfax County Parkway at the intersection with Kingman Road. The address, 1775 Liberty Drive, is a nod to the year of the Army's founding. 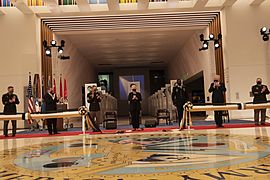 Museum Director Tammy Call cuts a ribbon with a ceremonial sword to officially open the museum to the public.

The museum opened to the public on Veterans Day in November 2020. The ceremony was attended by acting Secretary of Defense Christopher C. Miller and Secretary of the Army Ryan D. McCarthy, both former Army officers. Also attending were Chairman of the Joint Chiefs of Staff Army General Mark A. Milley, Army Chief of Staff General James C. McConville and Sergeant Major of the Army Michael A. Grinston.

All content from Kiddle encyclopedia articles (including the article images and facts) can be freely used under Attribution-ShareAlike license, unless stated otherwise. Cite this article:
National Museum of the United States Army Facts for Kids. Kiddle Encyclopedia.