Its original purpose was to demonstrate better breeding and feeding techniques to area stockmen. The founders included Elias M. Ammons, president of the Colorado Cattle and Horse Growers Association and later governor of Colorado; George Ballentine, general manager of the Denver Union Stock Yard Company; and Fred P. Johnson, publisher of the Record Stockman. Since first held in 1906, it has become the world's largest stock show by number of animals and offers the world's only carload and pen cattle show. 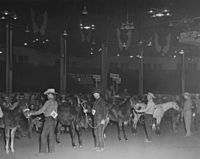 Quarter Horses at the National Western Stock Show, Circa 1950

Originally limited to the livestock from the western United States, the show was expanded by 1908 to include entrants from around the world. A horse show was included as an annual event in 1908, and a rodeo was added in 1931. By 1925, an event for 4-H, the 4-H Roundup, was also held in conjunction with the stock show. By 1981 the organization owned numerous buildings, more than twenty acres of stockyards, several acres of parking, and total assets of about five million dollars.

The stock show is governed by the Western Stock Show Association, a Colorado 501(c)3 institution, which produces the annual National Western Stock Show in an effort to forward the association's mission: "To preserve the western lifestyle by providing a showcase for the agricultural industry through emphasis on education, genetic development, innovative technology and offering the world's largest agricultural marketing opportunities".

The horse shows at the annual National Western Stock Show are among the largest in the world with more than 18,000 entries at the 2006 event, including Quarter Horses, Paint Horses, Hunters & Jumpers, FUSE Open Horse Shows, Mules Shows and the Draft Horse Show & Pull.

The National Western Rodeo is nationally recognized as one of the largest indoor rodeos and has won honors from the Professional Rodeo Cowboys Association (PRCA), including multiple Indoor Rodeo of the Year titles. Additionally, the ProRodeo Hall of Fame in Colorado Springs, Colorado, inducted the National Western Stock Show and Rodeo in 2008.

The show was not held in 1915 due to a national outbreak of Foot & Mouth disease (now also known as Hoof & Mouth) which affects animals with cloven hoofs such as cattle and again in 2021 due to Covid19. It will return in 2022.

All content from Kiddle encyclopedia articles (including the article images and facts) can be freely used under Attribution-ShareAlike license, unless stated otherwise. Cite this article:
National Western Stock Show Facts for Kids. Kiddle Encyclopedia.