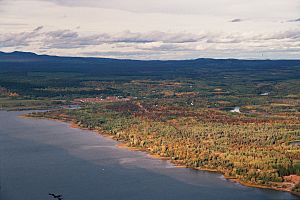 Only 800 metres (2,600 ft) long, it is the shortest river in the province and one of the shortest rivers in the world, along with Powell River (also known as Powell Creek), the Wannock River at Rivers Inlet, and the Little River connecting Shuswap and Little Shuswap Lakes.

There is a long-standing feud between proponents of Powell Creek and those of the Nautley River over which body is the shortest. However, Powell Creek is a creek and technically recorded under Canadian Insignificant Fluvial Features.

The river is entirely on the Nadleh Whut'en First Nation reserve.

All content from Kiddle encyclopedia articles (including the article images and facts) can be freely used under Attribution-ShareAlike license, unless stated otherwise. Cite this article:
Nautley River Facts for Kids. Kiddle Encyclopedia.