Nelson Head Light, also known as Nelson Head Inner Light, is an inactive, unusual lighthouse on Nelson Head, a headland northeast of the town of Nelson Bay, New South Wales, Australia, near Halifax Park, on the southern shore of Port Stephens. The light guided ships into the port. Unlike other lighthouses, the Nelson Head Light has no tower, but was shown through the window of the lantern room, and later mounted outside.

The station was established in 1872 as four kerosene lamps shown from a wooden tower. 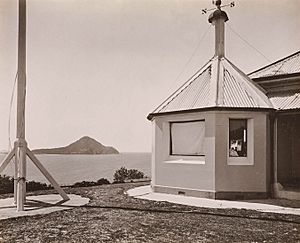 The current cottage was built three years later, and the light was first shown from it in 1876. The light was installed in an octagonal lantern room attached to the house, and shown through a 3 metres (9.8 ft) window. The house was occupied by 14 successive resident keepers, and the Maritime Service Board, until 1985.

In 1995 the light was replaced with a solar powered lantern which was attached outside the previous lantern room. In early 2003 the light was deemed unnecessary, and it was shut down.

The house is accessible by road from Nelson Bay and is open daily to visitors.

All content from Kiddle encyclopedia articles (including the article images and facts) can be freely used under Attribution-ShareAlike license, unless stated otherwise. Cite this article:
Nelson Head Light Facts for Kids. Kiddle Encyclopedia.