The New Century Guild, now the New Century Trust, is a historic women's support organization headquartered in Philadelphia, Pennsylvania. Founded in 1882, it is one of the oldest and largest organizations devoted to meeting the needs of women in the labor force. From its founding, the organization's goal has been to address the specific needs of "self-supporting women." Its headquarters building at 1307 Locust Street in Center City, Philadelphia is a National Historic Landmark. 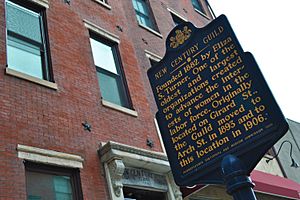 In 1882, Eliza Sproat Turner and other members of the New Century Club formed a committee for working women named the New Century Guild. It grew out a collection of evening classes for working women that began in 1880. She was assisted by artist Gabrielle D. Clements and Florence Kelley (later Mrs. Wischnevetsky). Its purpose was to provide education and opportunities for working women to learn a vocation. Soon afterward, the Guild became a separate organization and it needed its own building by 1892 to support programs and classes. The New Century Trust was formed in 1893 to facilitate funding for its first building.

The Guild headquarters are in a four-story Italianate brick rowhouse built in 1851. It was purchased by the Guild in 1906 from the estate of Dr. Thomas Drysdale. In addition to housing the offices of the guild, it has a library and meeting spaces available for its membership. The building was declared a National Historic Landmark in 1993 in recognition of the guild's history.

All content from Kiddle encyclopedia articles (including the article images and facts) can be freely used under Attribution-ShareAlike license, unless stated otherwise. Cite this article:
New Century Guild Facts for Kids. Kiddle Encyclopedia.