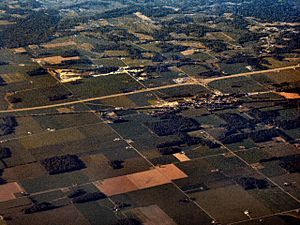 New Point is a town in Salt Creek Township, Decatur County, Indiana, United States. The population was 331 at the 2010 census.

The town is located approximately one-half mile south of Interstate 74 at Exit 143. (State Highway 46 runs parallel to the town on its north side.) Utilities include city water and city sewage. At the present there is no natural gas piped to the town. The closest connection is 5.5 miles to the east on State Highway 46.

The town is divided geographically by an active railway running east to Cincinnati, Ohio and west to Indianapolis, Indiana. Tub Creek, a tiny stream, originates just north of New Point and runs through it from north to south.

The community boasts a small post office, community center, park, and a volunteer fire department. There is a small restaurant (Midtown Diner), a convenience store, and a truck stop. There is usually one police officer employed by the town. New Point also has quite a few local businesses: a trucking company: Billman Trucking Inc., several small factories such as Wood-Mizer Products, Incorporated, Raver Ready-Mix Concrete, a concrete statue business (Snyder's Concrete Statues) and other small businesses. It is surrounded by family-owned and operated farms and agricultural enterprises. Also, a local golf course (North Branch) and a productive stone quarry (New Point Stone, Co) lie approximately 1–2 miles north/northwest of the town.

The town is governed by a board of elected officials.

There were 124 households, of which 39.5% had children under the age of 18 living with them, 48.4% were married couples living together, 12.9% had a female householder with no husband present, 6.5% had a male householder with no wife present, and 32.3% were non-families. 23.4% of all households were made up of individuals, and 11.3% had someone living alone who was 65 years of age or older. The average household size was 2.67 and the average family size was 3.18.

The community has an annual festival called Crackaway Daze which is held on the third full weekend of September. There is also an annual Volunteer Fireman's Picnic held at the firestation to raise money for funding for the fire department, including food, games, a dunk tank, and raffle.

There once was a school where the park is currently located. This school was no longer used after the consolidation of community schools into a larger county school corporation (North and South Decatur Schools). The park is now used for the Crackaway Daze festival, local events, and little league.

New Point, like the rest of Decatur County, has seen a lot of economic development in recent years. Many small businesses and housing developments have appeared, changing the cultural landscape of the small village. A recently added mobile home park has increased the population, but has also led to an influx of new residents. The town government seems to be fairly active, but has also led to controversy amongst the citizens of New Point.

Just across Highway 46, there is a convenience store called Day and Night. This store was once locally owned, but has since come under new ownership, which has since become a BP franchise.

A motel is also open next door from BP called Motel 46.

North of this there is a truck stop. This truck stop is owned by the G & G Oil corporation of Muncie, Indiana, who have made it part of the "Petro" franchise. This truck stop has a reputation for being a mom-and-pop truck stop. The truck stop was under the management of Robert and LaVonne "Bonnie" Morton, of New Point, for the longest time, thus giving it the name Bob's Truck Stop. Bob was in charge of the trucking aspect; service, managing, as well as towing. Bonnie managed the restaurant and its many employees over the years. It is currently managed by Gary Copeland, who is also active in local radio and business. The truck stop features a travel store, restaurant, shower and laundry facilities, and a tiny arcade. There is also a service center for commercial trucks.

All content from Kiddle encyclopedia articles (including the article images and facts) can be freely used under Attribution-ShareAlike license, unless stated otherwise. Cite this article:
New Point, Indiana Facts for Kids. Kiddle Encyclopedia.