Kids Encyclopedia Facts
For the species from South America, Antarctica and southern ocean islands that sometimes is known as the king shag, see imperial shag.

The New Zealand king shag (Leucocarbo carunculatus), also known as the rough-faced shag, king shag or kawau, is a rare bird endemic to New Zealand. Some taxonomic authorities, including the International Ornithologists' Union, place this species in the genus Leucocarbo. Others place it in the genus Phalacrocorax. 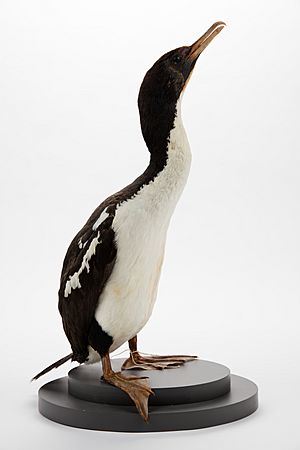 It is a large (76 cm long, 2.5 kg in weight) black and white cormorant with pink feet. White patches on the wings appear as bars when the wings are folded. Yellow-orange swellings (caruncles) are found above the base of the bill. The grey gular pouch is reddish in the breeding season. A blue eye-ring indicates its kinship with the other blue-eyed shags.

New Zealand king shags can be seen from the Cook Strait ferries in Queen Charlotte Sound opposite the beginning of the Tory Channel. They live in the coastal waters of the Marlborough Sounds where they are known to breed only on rocky islets at four small sites.

All content from Kiddle encyclopedia articles (including the article images and facts) can be freely used under Attribution-ShareAlike license, unless stated otherwise. Cite this article:
New Zealand king shag Facts for Kids. Kiddle Encyclopedia.