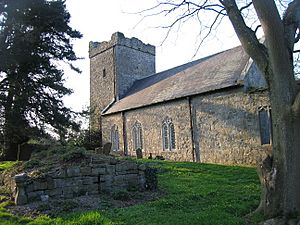 Newcastle (Irish: An Caisleán Nua) is a village in south-west South Dublin, Ireland. It is also a civil parish in the barony of the same name. It was the location of the castle of the barony, which in historical and official documents is described as Newcastle-Lyons. The area is still primarily rural in nature.

Newcastle-Lyons is located at the junction of the R120 and the R405 regional roads. It lies approximately 3 km north of the N7 at Rathcoole, 6 km south east of Celbridge, and 9 km west of Tallaght. The village lies west of Casement Aerodrome (Baldonnell), the HQ of the Irish Air Corps. It features a public house and two churches. Peamount Hospital, a long term care facility, is 2 km north of the town centre on the R120. The 2001 census registered a village population of 1,160, but the surrounding area has been growing rapidly since then, with the village population doubling by 2010.

The gradual relaxation of the Penal Laws throughout the UK from 1778 culminated in the Relief Acts passed by the British Parliament Catholic Relief Act 1791 and the Irish Parliament in 1793. The eventual achievement of full Catholic Relief was secured during the administration of the Dublin born hero of the Napoleonic war, the Duke of Wellington. Signed into law by George IV, it proclaimed wide Catholic Emancipation in 1829. This followed a very effective Irish campaign by Daniel O'Connell, the Liberator. In the ensuing general Christian religious revival, it became possible for the reinstated Roman Catholic Church community to build a new church here in the 1830s. The existing pre-reformation Irish Church premises continued in use as a place of worship by the established Church of Ireland following the schism caused by the divorce of the newly created King of Ireland, Henry VIII. The subsequent church Reformation in the 1550s under Edward and later under Elizabeth I during the Tudor reconquest and plantation of Ireland was only moderately successful. It did not succeed with the majority of the native Irish or Hiberno-Irish leaders or, as a consequence, with their few priests or their generally illiterate followers. The former residential tower fortification of the castle (see thumbnail right) now forms part of the Church of Ireland church building. It was built originally in the late 14th century. There are remains of another 14th century church in Colmanstown(53°16′38″N 6°30′34″W﻿ / ﻿53.27715°N 6.50936°W﻿ / 53.27715; -6.50936.).

Newcastle-Lyons is served by the number 311 bus which links it to Tallaght and the Luas Red Line,and the number 68 bus to the city centre.

Newcastle-Lyons is home to St Finian's (Newcastle) GAA club (Irish: CLG Naomh Finnéin) which was founded in 1943. In 1949 the club won the Dublin Intermediate Championship. The club's men's adult team currently plays in division 4 of the Dublin league, with the adult ladies' team playing in the Junior league and championship. The club recently developed their playing pitch at Alymer Road which can now be named as one of the finest grounds in the county.

Newcastle-Lyons is also home to Peamount United football club which was founded in 1983. The club is now based in a purpose build facility in Greenogue, Newcastle. In 2011 Peamount United's ladies team became the first Irish club to qualify for the champions league. Peamount United's male adult team plays in the Senior 1 division of the leinster senior league.

All content from Kiddle encyclopedia articles (including the article images and facts) can be freely used under Attribution-ShareAlike license, unless stated otherwise. Cite this article:
Newcastle, South Dublin Facts for Kids. Kiddle Encyclopedia.