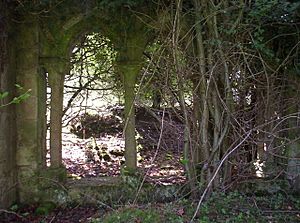 Newminster Abbey was a Cistercian abbey in Northumberland in the north of England. The site is protected by Grade II listed building and Scheduled Ancient Monument status.

Ranulph de Merlay, lord of Morpeth, and his wife, Juliana, daughter of Gospatric II, Earl of Lothian, founded the abbey in 1137 and Saint Robert of Newminster from the Cistercian Fountains Abbey was appointed as the first abbot; he governed from 1138 to 1159. The year after its foundation, the abbey was burned in an attack by Scottish raiders. It was rebuilt in 1180.

Although located to the west of Morpeth, Northumberland, the abbey possessed lands extending to the Scottish border, and annually led sheep there to pasture during the summer months. After closure during the first wave of dissolution in 1537, the estate was leased by the Crown by the Grey family who used many of the stones for their own buildings.

The estate including the site of the abbey was sold by the Crown to Robert Brandling in 1609, and was sold on by the Brandling family in 1709 to John Ord of Fenham.

The site is in private ownership and there is no public access or parking near it. However, the site can be viewed from the hill above it and from a public footpath that runs on the west side. Access to the footpath is best from Kirkhill where you can park a car.

The abbey is the namesake of the Abbey Well water brand created by Waters & Robson.

Burials at the abbey

All content from Kiddle encyclopedia articles (including the article images and facts) can be freely used under Attribution-ShareAlike license, unless stated otherwise. Cite this article:
Newminster Abbey Facts for Kids. Kiddle Encyclopedia.