Newport is a borough in Perry County, Pennsylvania, United States. The population was 1,574 at the 2010 census. It is part of the Harrisburg–Carlisle Metropolitan Statistical Area.

The Bridge in Newport Borough and Newport Historic District are listed on the National Register of Historic Places.

According to the United States Census Bureau, the borough has a total area of 0.3 square miles (0.78 km2), all land. 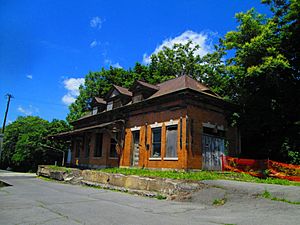 The former Pennsylvania Railroad depot in Newport, alongside PA 34

Newport was originally known as Ryder's Ferry, as it was the site of an early ferry on the Juniata River. It was later renamed Newport after the canal came through.

Newport was the eastern end of the Newport and Shermans Valley Railroad. There was a freight yard where railcars and cargo could be transferred to standard gauge for the Pennsylvania Railroad. 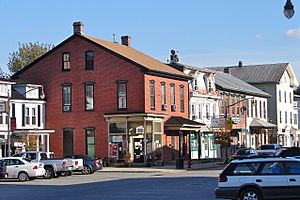 Newport once had a large tannery that operated from the second half of the 19th century until the early part of the 20th. The town playground and youth baseball fields now occupy the site. The baseball field is named after Billy Cox, a town native who played third base for the Pittsburgh Pirates, Brooklyn Dodgers and Baltimore Orioles in the 1940s and 1950s. Other Newport natives include Jonathan Clay, who was awarded both a Purple Heart and Bronze Star with Valor for exemplary service in Afghanistan. Clay was injured on October 9, 2006 by a rocket-propelled grenade (RPG) in Zabul Province, Afghanistan.

The high school which serves the borough as well as several surrounding townships is located at the northwest corner of town, and was remodeled in 2007. Their nickname is the Buffaloes, and their field is named after George Katchmer, who coached the school to their only undefeated campaign in 1953. The field is dual purpose and is used for football and baseball.

All content from Kiddle encyclopedia articles (including the article images and facts) can be freely used under Attribution-ShareAlike license, unless stated otherwise. Cite this article:
Newport, Pennsylvania Facts for Kids. Kiddle Encyclopedia.