Newville was founded by John Frederick Herring, and was platted in December 1823. It is situated upon section three, Worthington Township. Abraham Nye was one of the first settlers there, and was instrumental in inducing Mr. Herring to lay out the town. Newville lies in a small valley at the confluence of Slater's Run with the Clearfork of the Mohican River, nearly surrounded by tree-covered hills. 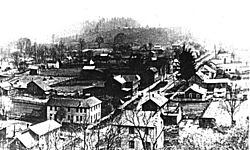 In 1811–12, John Frederick Herring built the second grist mill in Richland County. This mill was situate on the Clearfork, four miles west of Bellville, in what is now Perry township. Peter Weirick was employed to do the carpenter work, and while he was erecting the building, Mr. Herring drove to Baltimore with a six-horse team to procure burrs, wheels and gearings for the mill. The round trip from this part of Ohio to Baltimore and return was then made by team and occupied about two months’ time. Now the same distance can be traveled in fewer hours than the days required then. After operating this mill for several years, Mr. Herring sold the same to Francis Baughman in 1815. In 1833, Mr. Baughman disposed of this property to John Hanawalt, who operated the same for about fifty years, and the mill is known in history as “Hanawalt’s.” This mill stood where the Lexington and Fredericktown road crosses the Clearfork. The building is now used as a barn. John Hanawalt was the father of J. L. Hanawalt of South Main Street, Mansfield.

After selling the mill west of Bellville, Mr. Herring entered another millsite, also on the Clearfork, fifteen miles down the stream, where he erected his second grist mill, and a few years later laid out the town of Newville.

The first settlers in Newville and vicinity were John Frederick Herring, Abraham Nye, Michael Hogan, Daniel Carpenter, George Armentrout and Luther Richard. Abraham Nye was the first tavern keeper, Daniel Stoner the first blacksmith and Michael Hogan the first merchant. Newville was named after Newville, Pennsylvania, the native place of the founder of the town.

At the time Newville was laid out, the volume of water in the Clearfork of the Mohican was larger than it is now, and the pioneers were wont to found towns along streams of water, for mill-power and other purposes. Great things and a bright future were predicted for the town, but the hopes entertained for its future greatness were never realized in the scramble for new counties back in the “forties.” Newville had hopes of becoming a county-seat town, but did not. To add further to disappointments as to future prosperity, the two railroads that were built through the southern part of the county left Newville about midway between them, the B&O at Butler, four miles to the southwest, and the Pennsylvania at Perrysville, four miles to the east. This being a railroad age, towns off the paths of the iron horse seldom thrive, and Newville has been no exception to the general rule.

The early settlers of the Newville country came, mostly, along the old Wyandot trail, following up the Mohican and its Clearfork to Newville. Some of the later arrivals came along the Portage road - a military road cut through by a portion of General Harrison’s army in 1812. This road runs diagonally across Worthington township from the northeast to southwest. This was probably the first road in the township, and although it has been changed in certain places to conform to local conditions, it is still a public highway.

The decade between 1825 and 1835 was a preaching period at Newville, such as no other town in the county ever passed through. Men preached according to their own views of the scriptures without regard to what any denomination taught or believed, all agreeing, however, upon Anabaptist lines. They were out-comers from various sects, and in time organized new ones. The most prominent among these preachers were the Rigdons - Sydney and Thomas, both gifted men and orators of great power. Sydney Rigdon, it has been claimed, was one of the most charming and convincing speakers of that olden time when there were orators in the land. For several years he was a minister of the Disciples, as was also his brother Thomas. Later Sydney became a Mormon elder, and took a number of converts from the southern part of this county with him to Nauvoo. In time, an estrangement sprang up between Brigham Young and Mr. Rigdon, resulting in the withdrawal of the latter, who returned to the east, where he died in 1875, aged eighty-three years. Notwithstanding the early promulgation of different views, the M. E. church is the only one that has been able to maintain an existence as a religious body in Newville.

Worthington Township, in which Newville is situated, was the banner township in the camp-meeting line, in the days of the popularity of such gatherings. Of the several camp-meeting sites, the one called “Easterly’s” two miles west of Newville, was the most popular and the best known. The meetings were under the auspices of the United Brethren denomination. Perhaps, also, by the Evangelicals, commonly called the “Albrights.”

In these camp-meeting gatherings, social cordiality was blended with religious zeal. Fervor along religious lines was more intense and demonstrative a half-century ago than it is today. A man was expected to shout to show his zeal and attest his spirituality. It is different now. The camp-meeting preachers believed, as a rule, that “where the spirit of God is, there is liberty.” And aside from the general supervision of the prayer meetings, they did not attempt to control the boisterous element around them. Thus the meetings seldom got far advanced before men and women were praying, groaning and singing together. Some were groaning on account of their sins, some praying for their companions, others singing and shouting because they felt happy, and a few would swoon from physical exhaustion.

A horse-back procession of religious enthusiasts, returning from a camp-meeting, was heard approaching by a poorly-clad woman working in a field near to the roadside. It was a sound of music - of men’s and women’s voices mingling harmoniously together in sacred song. Abashed, she hid herself behind a tree, but peeped around as the procession passed by. To the unseen observer, the countenance of the leader’s wife seemed lighted up like the face of a glorified saint. Her bonnet hung by its ribbons down her back, and her auburn hair floated like waves of golden sheen over her shoulders, forming a beautiful, living, moving picture.

The Honorable Samuel J. Kirkwood was one of the first school-teachers of the village. Mr. Kirkwood read law, became prosecuting attorney of Richland county, and after the close of his term, removed to Iowa, became governor of that state; was later a senator in the congress of the United States and closed his official career as a member of the Garfield cabinet.

Major Hogan was a scholar and a gentleman, more devoted to his books then to his business interests.

Dr. J. P. Henderson, who passed nearly all his life in Newville, was a close student and much devoted to archaeological researches.

Joseph Musgrave, once a Newville merchant, was a state senator from the Ashland district in 1856–57.

The late Major George F. Carpenter, lawyer and banker, was a son of the Daniel Carpenter, the promoter of the early business interests of Newville. Major Carpenter was one of the charter members of the Richland County Historical society and its first vice president.

The Governor John Peter Altgeld was for several years a Newville boy. As a man, in after years, he became a noted jurist, an eloquent orator and a great leader among men.

Daniel Carpenter, father of W. B. Carpenter, of Mansfield, was one of the principal promoters of the business and industrial interests of Newville. He had a store of general merchandise and founded and operated a tannery and an ashery. Baltimore was the market place for this part of the country at that time and the journey to and from - a round-trip distance of a thousand miles - had to be made with wagon teams, part of the journey was over mountain roads. Grain was too bulky, heavy and low-priced to haul so far to market. Ginseng, maple sugar and beeswax were the principal marketable articles and they were not all-year-round products. To further the business interests of the town, Daniel Carpenter founded an “ashery,” and manufactured another exportable commodity - pearl ash. His teams traversed the country for miles around, buying ashes of the farmers, thus adding to their meager income.

Among the early industries, was pennyroyal distilleries, dotted here and there over the pennyroyal regions of Ohio. Pennyroyal grew in profusion in the southern part of the country in the earliest days. It is a deciduous, herbaceous plant, aromatic, with a pungent taste. As this was a rare and peculiar industry, a brief description of the process of distillation may be of interest to the reader. The pennyroyal after being gathered, was allowed to wilt until it would pack well, and was then tramped down carefully in a steam chest until it was full. The oil is in small globules on the under side of the leaf. When set free by steam, it passed into a condenser, into which a small stream of cold water was conducted. After being condensed, it was poured into an oil vat, nearly filled with water. The oil being lighter than the water, ran into the vessel and passed out into a receiver. Pennyroyal oil is used for its medicinal properties, and was thought by the pioneers to be valuable as a carminative remedy. The last pennyroyal distillery in this part of the county was Fisher’s at Palmyra, five miles south of Bellville. At the Fisher distillery, essence of peppermint was also distilled.

Distilleries are often called “still-houses.” And upon this play of words, Comrade Ricksicker [Ricksecker], of Galion, tells a good anecdote in his indubitable way, at Grand Army reunions. As the story goes, a revenue officer was trying to ferret out illicit distilleries in Kentucky during the later part of the civil war. He had not been successful, and being anxious to show results, approached a tipsy soldier, an Irishman, and inquired after “private stills,” as the illicit distilleries are called. But Paddy didn’t seem to have any information to give out. Then the detective offered him a ten-dollar bill, whereupon Paddy admitted having certain knowledge about several private stills and offered to conduct the officer to one, but the money must be paid in advance. This having been done, Paddy escorted the detective though forests and over hills, and finally coming upon a camp of soldiers, they halted. The officer demanded an explanation. An Irishman never gives away a friend, even though he should be a “moonshiner.” Paddy called the officer’s attention to a soldier who was sitting by a tree, and said: “That man is of a good family, and enlisted with high hopes of being made a general within a short time. But now, after two years’ service, he is a “private still.”

In the 1940s, the U.S. Corps of Engineers built a dam on the Mohican river, that would under some circumstances, cause the town to be flooded, and it was ordered abandoned. Some of the foundations and buildings are still standing in the forest just west of the lake.

All content from Kiddle encyclopedia articles (including the article images and facts) can be freely used under Attribution-ShareAlike license, unless stated otherwise. Cite this article:
Newville, Ohio Facts for Kids. Kiddle Encyclopedia.