In 2018, Robinson was named in Forbes' "30 Under 30" list in the Hollywood & Entertainment category.

Robinson was born on March 22, 1995, in Seattle, Washington. He has four younger siblings. His mother is Denise Podnar. Robinson initially attended Seattle Preparatory School, but left in the middle of his freshman year and moved to Los Angeles after booking a regular role on Melissa & Joey. He graduated from Campbell Hall School in 2013. He was accepted to New York University’s College of Arts and Sciences and attended in the summer to work on another season of Melissa & Joey.

Robinson made his professional acting debut at the age of eleven with a role in a stage adaptation of Charles Dickens' novel A Christmas Carol. Talent scout Matt Casella recommended him to a few agencies and Robinson was eventually signed with the Los Angeles-based Savage Agency. Because of the 2007–2008 Writers Guild of America strike, Robinson's family moved back to Washington where he continued to perform on stage in and around Seattle.

In 2010, Robinson was cast in the role of Ryder Scanlon, the nephew of Melissa Joan Hart's character, on the ABC Family sitcom Melissa & Joey, playing the character until its cancellation in 2015.

In 2012, Robinson was cast in the lead role of Joe Toy in director Jord Vogt-Roberts' The Kings of Summer. He also guest-starred in the episode "Blue Bell Boy," during the third season of HBO's Boardwalk Empire. He also began appearing in a series of television commercials for Cox Communications entitled "Buffer Time is Bonding Time." 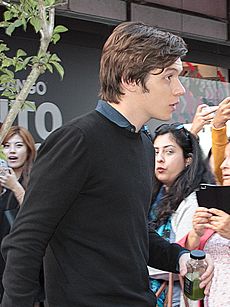 In 2015, Robinson portrayed Zach Mitchell in Jurassic World, in which he was widely seen. He played Ben Parish in the film adaptation of the novel The 5th Wave, which was released in January 2016. These roles made him unavailable for multiple episodes of the final season of Melissa & Joey, but he returned for the final three episodes.

He played the titular lead in independent film Being Charlie, a semi-autobiographical feature about director Rob Reiner's relationship with his son, which premiered at the 2015 Toronto International Film Festival; the film was released theatrically in 2016.

In 2017, he starred in William H. Macy's comedy-drama film Krystal, and as Olly in Everything, Everything, a film adaptation of the novel of the same name.

In 2018, Robinson starred as the titular Simon Spier in the gay coming out teen drama film Love, Simon. The film was considered ground-breaking because it was the first major studio film to focus on a gay, teenage romance. Robinson's performance as Simon garnered critical acclaim. After reading the script, Robinson revealed that he broke his own rule to no longer play high schoolers because he saw the cultural importance of the film. In 2019, he co-starred in the third film version of Richard Wright's Native Son.

In 2020, Robinson co-starred in the FX miniseries A Teacher, and he narrated his DM responses to the protagonist of Love, Victor, a Love, Simon spinoff TV series on Hulu, and appeared in two episodes of the show. In 2021, he starred in the Netflix miniseries Maid, opposite Margaret Qualley and Andie MacDowell. The series was critically acclaimed, with Robinson getting praise for his performance.

All content from Kiddle encyclopedia articles (including the article images and facts) can be freely used under Attribution-ShareAlike license, unless stated otherwise. Cite this article:
Nick Robinson (American actor) Facts for Kids. Kiddle Encyclopedia.