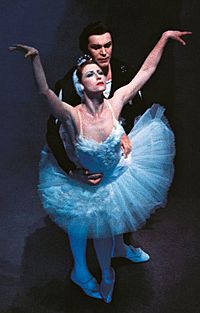 Nikolai Borisovich Fadeyechev (Russian: Николай Борисович Фадеечев, 27 January 1933 – 23 June 2020) was a Soviet and Russian ballet dancer and educator. He was honored with the People's Artist of the USSR in 1976. Fadeyechev was born in Moscow. He retired from ballet dancing in 1977 and later became a ballet educator.

He was known for his works with the Bolshoi Theatre. He danced alongside some of the company's great ballerinas, including Galina Ulanova in Giselle and Les Sylphides, and was a regular partner with Maya Plisetskaya, Raisa Struchkova, Nina Timofeeva, Marina Kondratyeva, Natalia Bessmertnova, Ekaterina Maximova and Ludmila Semenyaka.

All content from Kiddle encyclopedia articles (including the article images and facts) can be freely used under Attribution-ShareAlike license, unless stated otherwise. Cite this article:
Nikolai Fadeyechev Facts for Kids. Kiddle Encyclopedia.